Happiness is not a matter of intensity but of balance, order, rhythm and harmony. ~ Thomas Merton 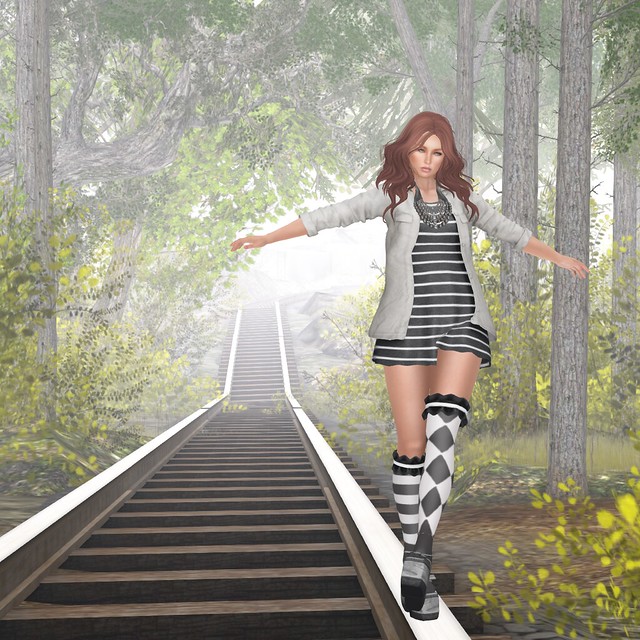 I took a springtime walk at Nusquam, enjoying the windlight through the trees and the warming spring air on the sim. I went for a black and white look to combine some fun pieces from The Project Se7en and Shiny Shabby. First is this dress/shirt combo from Larcoco Mathy for the Project Se7en that includes a HUD with a ton of choices for the inside dress. Then I pulled on funky socks made by BerthaWeiss, also at The Project Se7en, which has resizable garters that include a HUD for color choices. I am wearing some funky platform shoes from Pill Kanto for Shiny Shabby, a double balance on the train track at Nusquam. Mea Carnell’s stylish necklace for SaNaRae adds some circles to all my stripes. 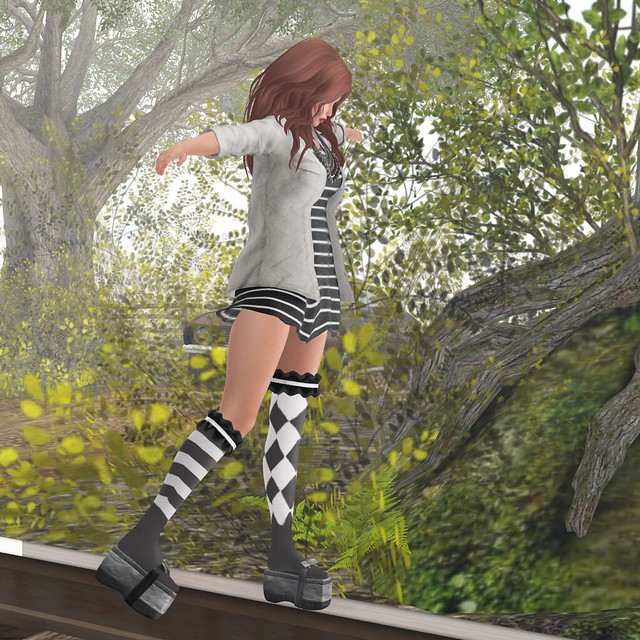 Shyla Diggs is rocking the appliers lately and has come out with another applier for the Catwa heads, this one new for the Mix Event and absolutely gorgeous. With several eye makeup and lipstick choices, it’s a great look on the Annie head. Shylah Honey has been cranking out some darling looks lately and this wavy casual ‘do for Fameshed is perfect for this spring day. 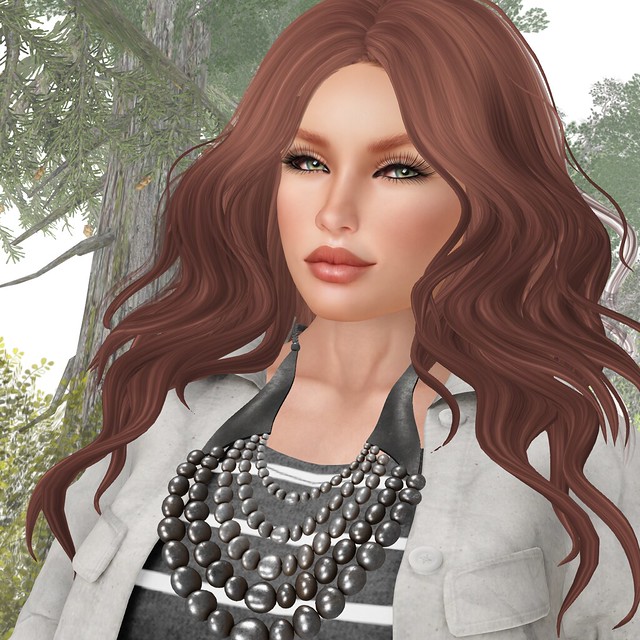 Socks: .EMBW. Joker Socks – Strips and Diamonds by BerthaWeiss for .EMBW., available at The Project Se7en *

Poses: -no wow- [balance] by Lisbeth Gummibaum for –no wow- 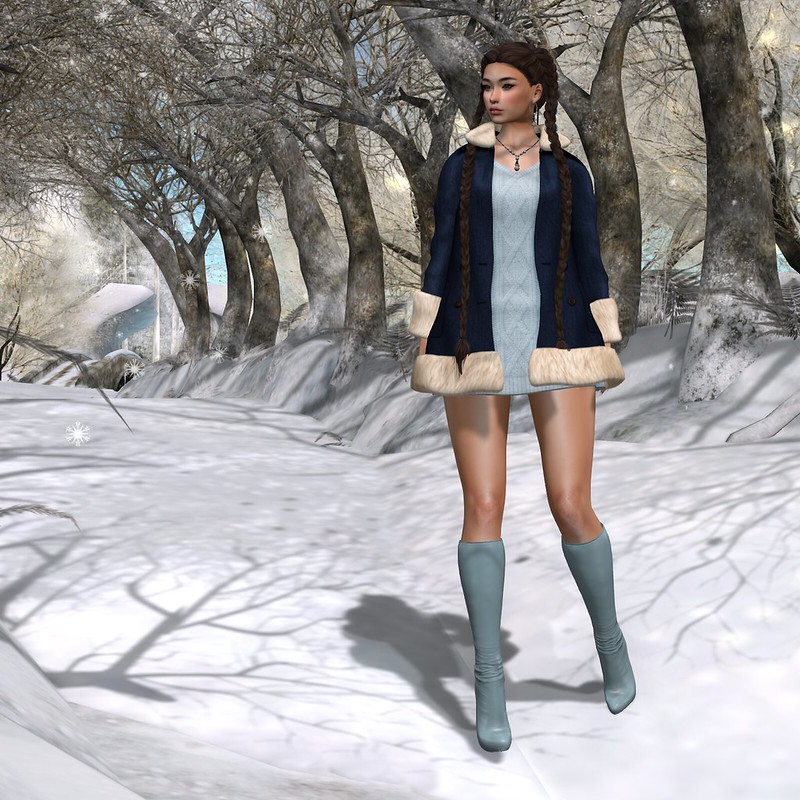 My friend Jaynine Scarborough is about to come out with an album that includes several gorgeous songs. Jaynine is a vocal teacher and performer in Berlin, who has, for years, also performed almost weekly in SL at her Thousand Rooms. If you have had the privilege of catching one of her weekly performances, you get to hear a beautiful woman’s voice, full of humor and earthiness and melody and sensuality. The song I link above is absolutely beautiful and the sentiment is perfect this season. Please click!!

I took a walk in a place called My Magic Winter to show off this darling coat from Larcoco Mathy for Shiny Shabby, which opens today. It includes a texture change HUD so you can switch up the sweater, buttons, and the detachable fur collar and cuffs. I wear it with Bax Coen’s newly redone knee-high boots, made specifically for different mesh bodies like the Maitreya Lara, the Bellezas and the Slinks.

Look closely and you can see today’s KittyCats & Friends Advent Calendar gift, a pair of earrings custom-fashioned by RL jewelry artist, Bastchild Lotus. With a texture change HUD that allows variations on the metal, the charm and the beads, it’s a terrific gift! Look again and you can see around my neck the cute snowman Abraxxa Anatine has fashioned for the holiday with clickable texture change for the metal and scarf. 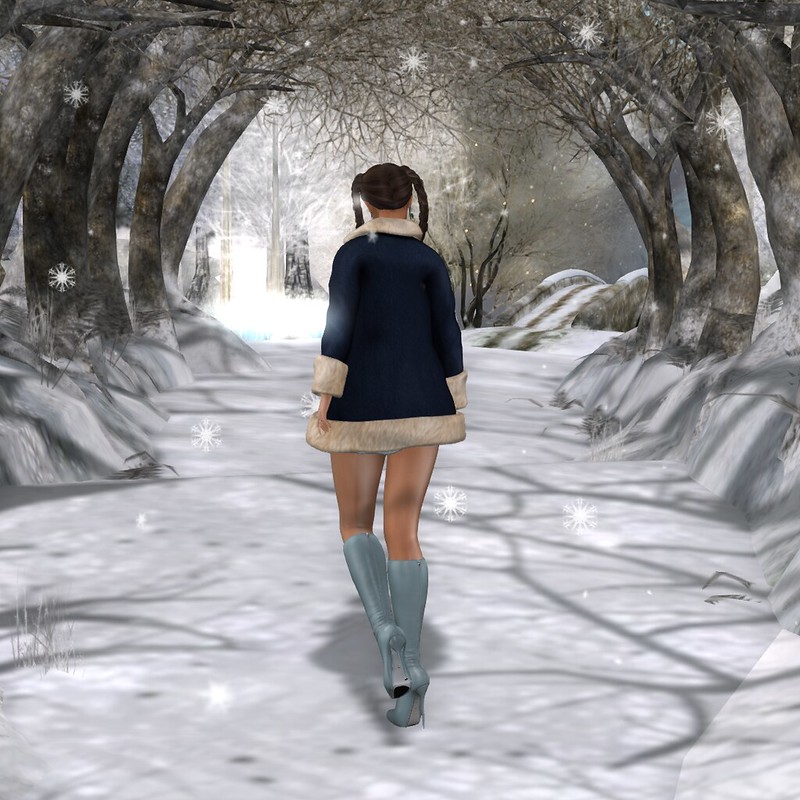 Umazuma Metaluna has made this gorgeous applier for the Catwa heads, which I am wearing on the Annie head. With several lip options, it’s a beautiful skin to match this head. (I am wearing it bare because I loved the look without lipstick for this outfit). Viking has made this great braid set for Hairology in several versions for most versatile wearing. With rigged and non rigged pieces, you can select the pieces that fit you best. Included is a great selection of hairbase HUDs for the Catwa head, Omega or TMP. 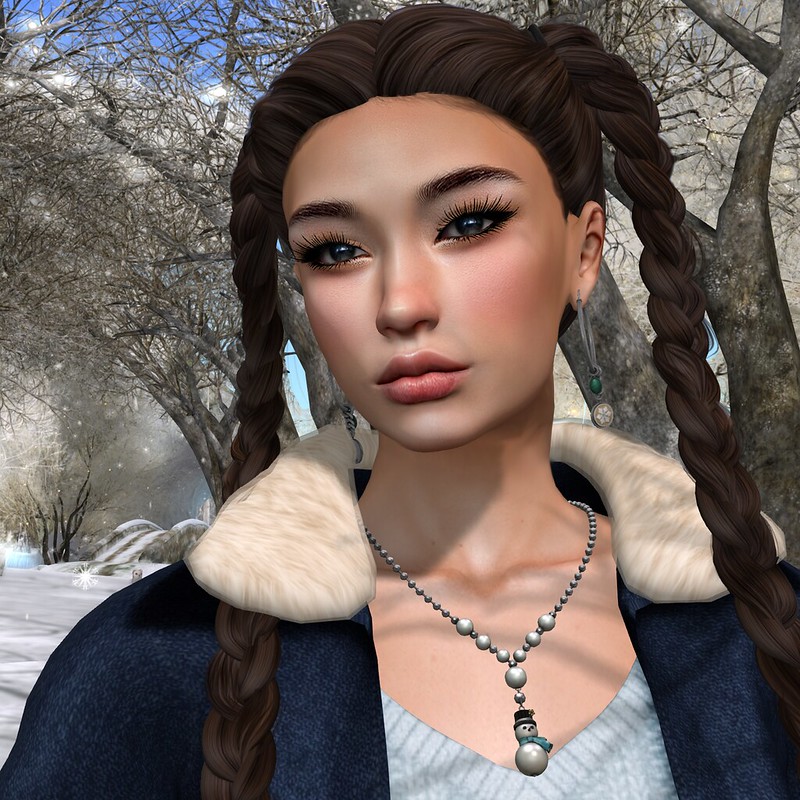 Taken at My Magic Winter

“The color of truth is gray.” ~ Andre Gide 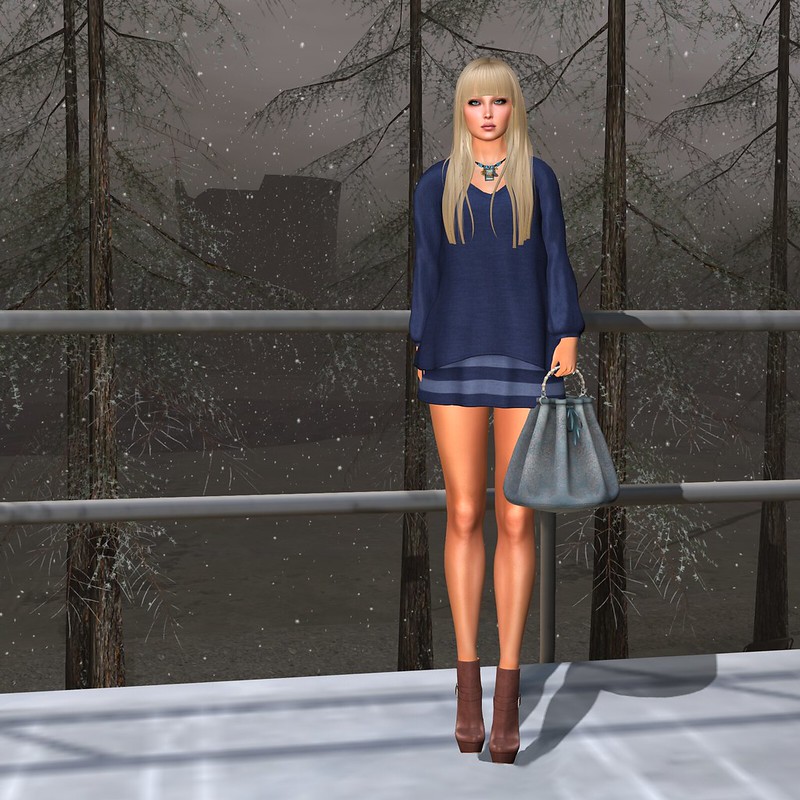 The season is turning to gray, both at events and on sims. I visited the new Furillen build by Serene Footman, inspired by the RL Furillen hotel, to see a widely gray scene based on the “brutal beauty of post-industry with the natural splendor of Gotland island.” It’s a beautiful place for photoing, of course, and I will probably return again and again as I do with most of Serene’s builds. The Shiny Shabby inspiration theme is gray as well. I wore this darling outfit from Larcoco Mathy for Shiny Shabby, which is a one-piece mesh look that includes a texture change for the skirt, so you purchase the sweater color and you get a variety of skirts to match via the HUD. Senzati0n Domenitzo’s chic boots for Geeks n Nerds keep me safe from the snow while looking chic and Christel Morane’s bucket bag for Boho Culture Fair has a fabulous texture change HUD to mix and match the bag, handle, and ribbon for an ideal look. 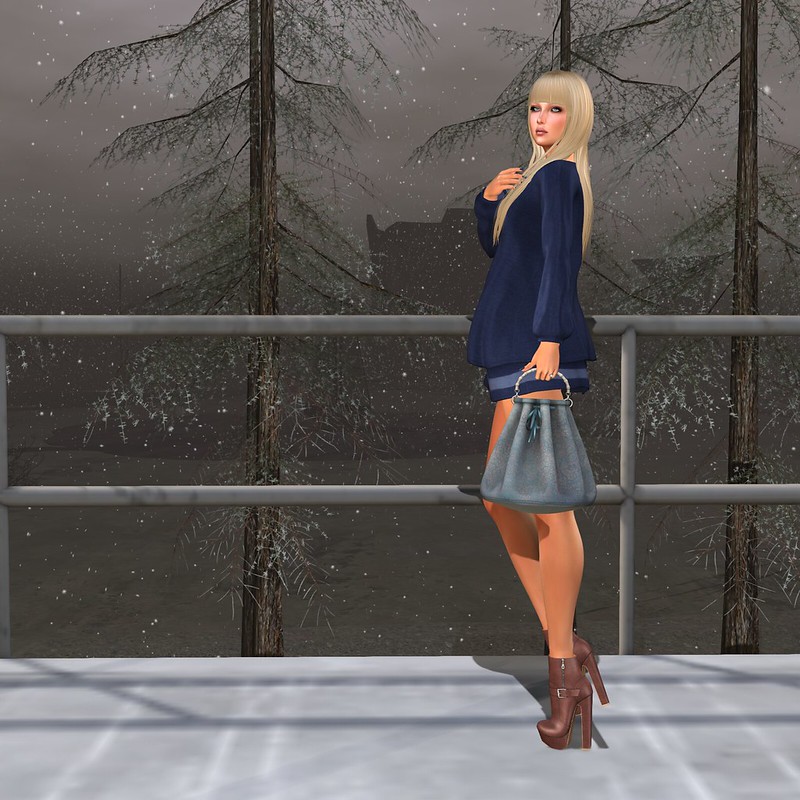 Shyla Diggs has brought her beautiful art to the Catwa Jessica head and it’s breathtaking. With fine features, luscious lips and Shyla’s absolutely gorgeous eye makeups, the face is transformed and becomes unique. With face framing bangs from one of Kuranosuke Kamachi’s new hairs, it’s a stunningly beautiful look. Bastchild Lotus has made a beautiful necklace for the gachas at the Freak Show, one that comes with a center piece with all the cards of the tarot and if you get one of the two rares, you get a HUD with texture change for the beads AND for the center cards. It’s well worth pumping some change into the gacha to try to get it. 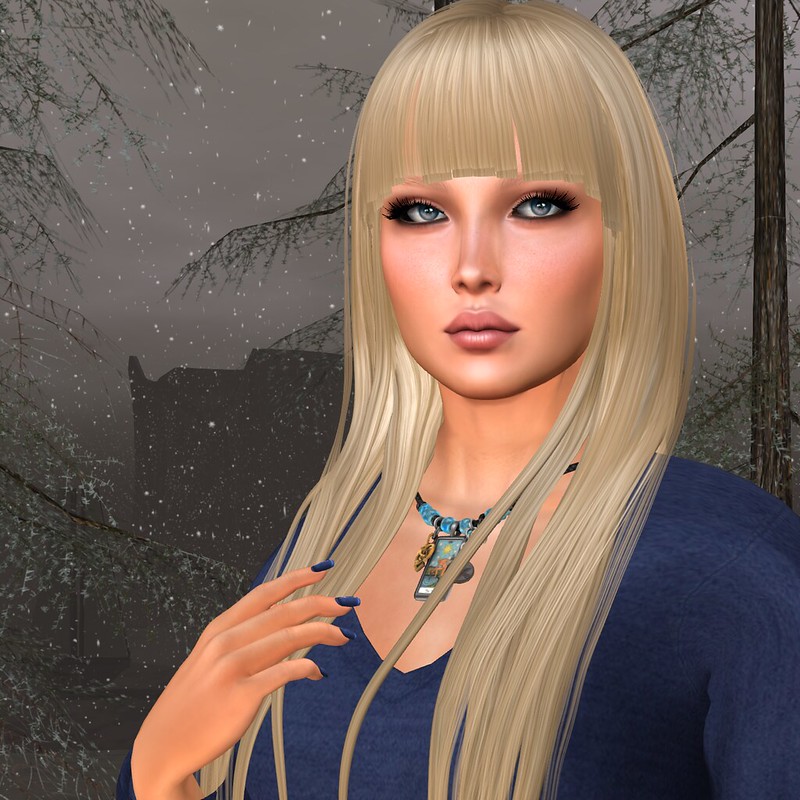 Nails: Nailed It – Belleza – Gemstones Set HUD by Giela Delpaso for Nailed It *

~ “Fell in Love with a Girl” by White Stripes 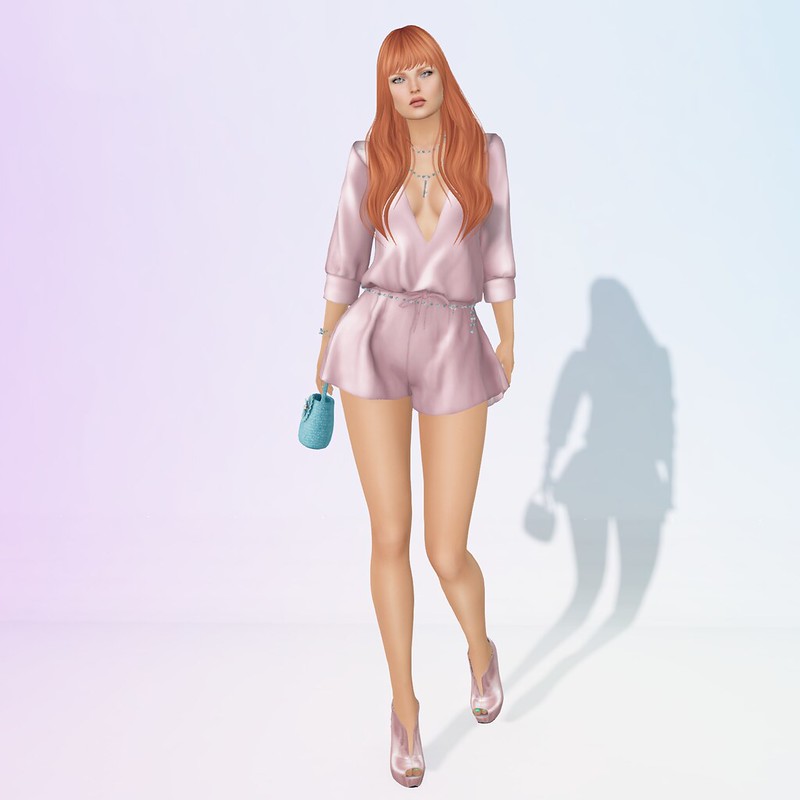 There’s always something special about a redhead. And if you think a redhead can’t wear pink, you’re decidedly wrong, especially if it’s this soft pink romper, one of several Poulet Koenkamp has made for On9. With a texture-change HUD offering three different colorways, each romper has its own individual flavor, this one having a romantic theme. I have accessorized with jewelry featuring an antique key and turquoise beads that Rucy Byron has made for Shiny Shabby, which will be opening May 20. I even wore the waist chain as a belt with this darling romper. And Bax Coen has come out with shiny new booties with materials, available in three fabulous metallic shades and sized for Slink AND Maitreya feet. 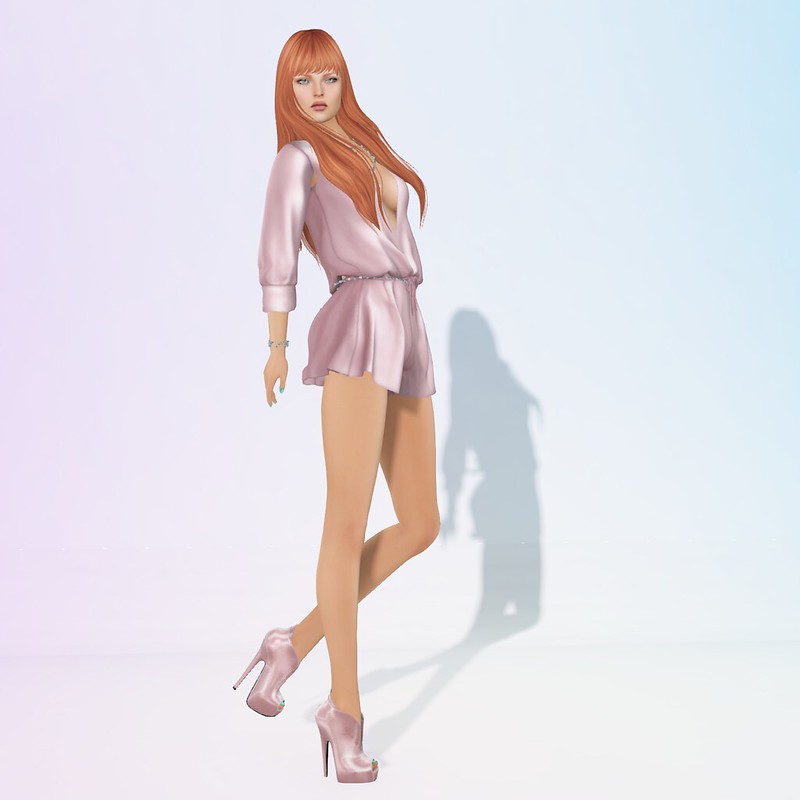 Monicuzza Babenco is also participating in Shiny Shabby this month with a gorgeous set of appliers for the LeLutka mesh heads. I wear them on the Aria head with the subtle shading and beautiful red brows she offers as an option. Once again, I had to adjust my eyes and lengthened my head for what I felt was the best aesthetic. Kavar Cleanslate recently came out with some lovely long hair he is offering in his mainstore including this gorgeous style with fringed bangs and his beautiful textures. 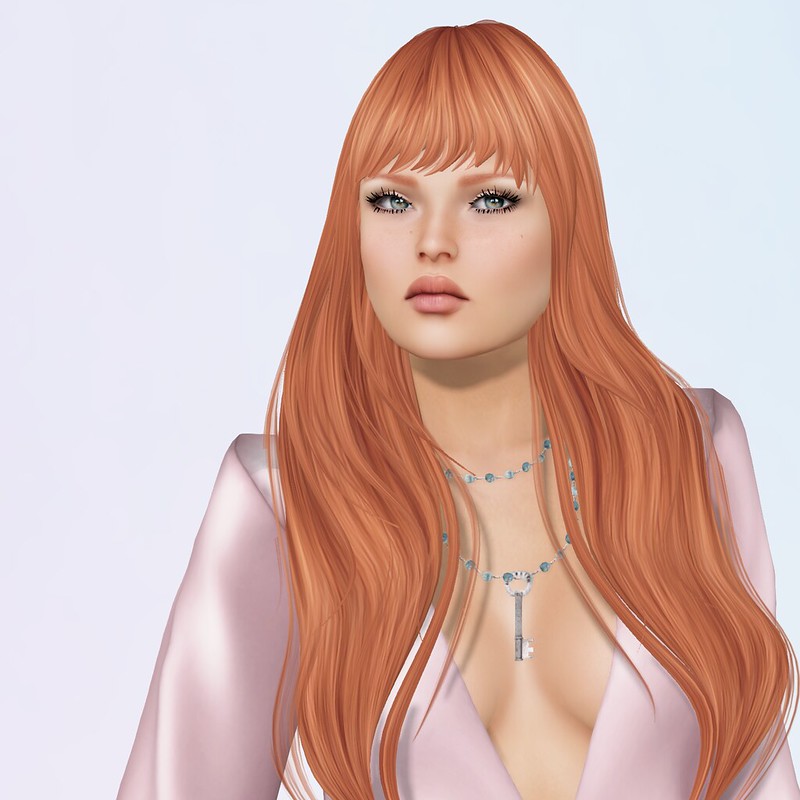 Romper: :: PM :: Who Romper Romantica by Poulet Koenkamp for PurpleMoon Creations, available at On9 *

“[T]his was what one might call a quote Granola Cruncher, or post-Hippie, New Ager, what have you, in college where one is often first exposed to social taxonomies we called them Granola Crunchers or simply Crunchers, terms comprising the prototypical sandals, unrefined fibers, daffy arcana, emotional incontinence, flamboyantly long hair, extreme liberality on social issues, financial support from parents they revile, bare feet, obscure import religions, indifferent hygiene, a gooey and somewhat canned vocabulary, the whole predictable peace-and-love post-Hippie diction….”

~ David Foster Wallace, Brief Interviews with Hideous Men, ‘#6   E——— on “How and Why I Have Come to be Totally Devoted to S——— and Have Made Her the Linchpin and Plinth of My Entire Emotional Existence”, The Paris Review

I recently read the above story from David Foster Wallace and was reminded why I had such a big crush on him while he was alive (which he is not anymore, having tragically committed suicide after a long battle with depression and tinkering with his meds, which proves to be a cautionary tale). He was the kind of man who is sensitive and abhorrent all at once, vulnerable as a tomcat’s wet pink nose, brutal in his masculinity, uncomfortable in the knowledge of his inborn inheritance as a quote Straight White Male .[1] You could smell through his writing his struggle with his need to be Male while being Sensitive, Thoughtful, and all those things a good post-feminist man should be. He quarreled with his own existence vis a vis women, as evidenced in his book, Brief Interviews with Hideous Men. [2] (The character speaking in the above was not Him—David Foster Wallace—but him—a representative of a male type DFW clearly had encountered as have many of us because DFW’s greatest gift was seeing the smallest cultural cues and entwining them in his epic works.) What made DFW so abhorent is that you knew he was going to be the kind of man who was kind, giving, understanding, and attentive, humble and profound when you met him, but the day after he would be the kind of man who would crush you when he did not call you in the morning as he suggested.

This is his Granola Cruncher, all free and loose in her tie-dye dress from Larcoco Mathy, barefeet from Siddean Munro slipped into little Birkenstocks from Take Lowey. (Thank goodness for multiple attachments—oh yes, I did.) Her lustrous blonde hair is wavy and loose, banded by a loose leather tie and beads from Truth Hawks.

But it’s her face he sees—the freckles scattered over her nose, the gentle blush of her cheeks, the exactitude of the shape of her lips (with a tiny ridge down the middle of her lower lip, two dimples teasing at the corners of her mouth)—all supplied by Gala Phoenix.

Why?Truthfully, he was really good-looking.

[1] He, however, was not as bad as the police captain in Junot Diaz’ masterpiece “The Brief Wondrous Life of Oscar Wao,” who was “one of those very bad men that not even postmodernism can explain away.”

[2] The story cited in the above quote was awarded the Aga Khan Prize for Fiction and possibly was the precipitant for his receipt of a MacArthur Fellowship.