“Every person needs to take one day away.  A day in which one consciously separates the past from the future.  Jobs, family, employers, and friends can exist one day without any one of us, and if our egos permit us to confess, they could exist eternally in our absence.  Each person deserves a day away in which no problems are confronted, no solutions searched for.  Each of us needs to withdraw from the cares which will not withdraw from us.” ~ Maya Angelou 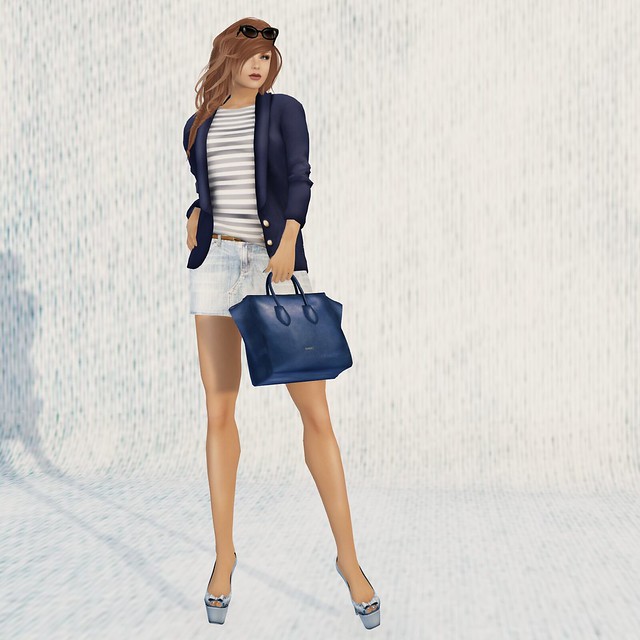 I live with a workaholic. At times I can be a workaholic. (Go figure.) A little dress down day for shopping or enjoying the weather or running errands is sometimes much needed—a time to decompress. I put together this look for such a day. Start with the blazer/top combo that Jesydream is offering at District 5. It’s casual yet tailored—not a grungy old sweatshirt—ideal for me. I’m not that kind of vacationing woman. My mesh skirt from Juliette Westerburg, which she has at Uber, is the piece to go with this look—sassy and short but not too flimsy. Brings the formalness of the blazer down. My high heels from Tatyana Ultsch, also at District 5, are fun slip-ons with a darling bow and great texture. Sunami Beck offers this luxe handbag at Uber and sunglasses from Jonas Acanthus are just the right accessory. 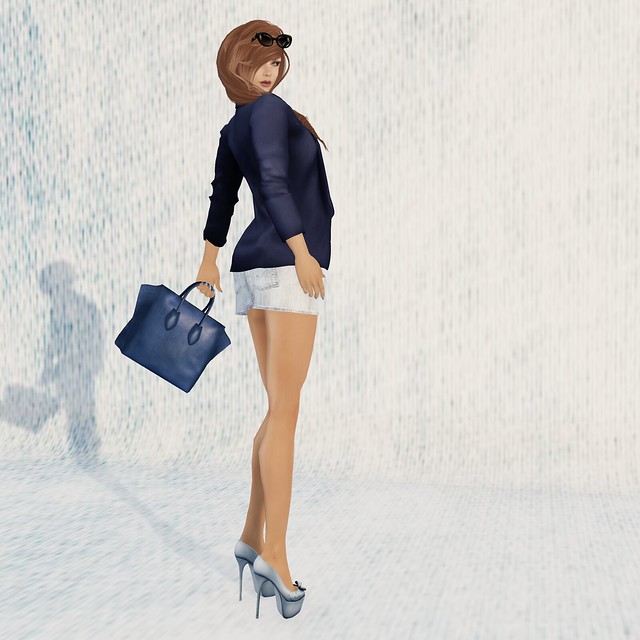 My full locks are pulled into a fishtail braid over my shoulder courtesy of Truth Hawks, who offers this great style in all his typical colors. My skin is Monicuzza Babenco’s gorgeous offer at The Dressing Room. I have not worn her skins as of late and was delighted to come back to one and find it fit so wonderfully to my shape. I have been showing a lot of Constance Daehlie’s eyes and makeup lately, if you hadn’t already picked up on that. I am really enjoying what she is doing with her work. Her colors are clear and crisp without cartoonishness. 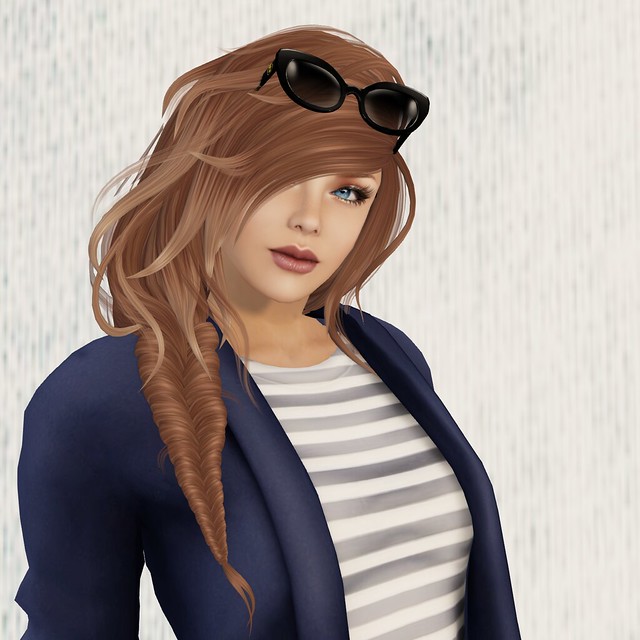 It’s been horrifically cold here and we saw SNOW yesterday but my crocuses are up and the irises are in abundance, if I am just counting leaves. (The snow did not stick, incidentally. Whew.)

I am tired.. worn out by the late winter/early spring. I decided to put on something light and fresh visually to give me the spark I need right now. This drss from sunami Beck was a great choice. With its lovely flower print in a basic tank over a short slim skirt, it’s chic and light (and a bit sexy).

My skin is Tuli Asturias’ newest, a fresh greeting to spring. She has included with the fat pack different eyebrow colorations, lipsticks, cleavage options, and freckles. Tuli is really understanding what women want and bringing her sophisticated beautiful look to this new set. My jewelry is from two places—Felicity Winslet, whose Mariposa brand is now defunct and Polly Pavlova and Maximillion Grant of Logo. While Max makes skins, Polly does jewelry, and she replicates RL pieces she has made in-world. I loved comboing the two sets of jewelry—I liked both pieces too much to not show one or the other.

April is a promise that May is bound to keep.  ~ Hal Borland

I received a note the other day that Dick Wiesel had been murdered. Now, being this was SL, it was clearly virtual murder and being that the man behind the avatar left a long exposition in my blog, I was pretty certain he was still alive. However, for fun, let’s pretend he’s dead and Ryker, his partner, is on the path of vengeance. (Be careful folks. She shoots first and asks questions later.) Our girl here seems a likely suspect.

First we have to ask about motive. Considering Dick is offering a whole slew of nice items during this promotion, including this dress, I think we can safely conclude motive. Our woman is wearing the final prize for the murder mystery, the belted miniskirt Nomi Jean Dress. Please note the fine original template work, the grungified jean texture and the stitching along the hem and wicked wrinkles. Best of all is the belt—well constructed and textured, the belt makes the dress. And the dress makes a girl desperate, and no man, not even Dick Wiesel can get in her way when she wants one like this.

Her jacket? No sign of struggle or gunpowder. Good thing too because sunami Beck has made a cute short leather jacket that can be worn again and again as a pop of color for any outfit. The 80s feel to this jacket (epitomized by the turquoise and those angular studs on the collar) make our killer either retro or horribly behind the times. Or perhaps she’s so chic she is deadly..?

She’s a cool one, isn’t she? Not a drop of sweat on her brow after doing whatever she did to poor Dick. Her calm demeanor is provided by Kira Ahn from the Dressing Room Blue. With her glowing clear skin (unlike her  conscience), our potential killer could almost be accused of killing with her good looks. Add to the look her wild and wavy hair from Truth Hawks, and we are looking at a woman with danger on her mind.

Finally, our sexy suspect is traipsing around in a pair of nut Barak’s new Crush pumps, and these are the key to the means of murder. Check out the details on these beauties–the platform sole, the sheen of the leather, the piping, and of course, the chains. What nut fails to tell in his informational notecards (about resizing, LOD factor, bleah bleah bleah) is that the stainless steel heel is hollow and can hide a very interesting treasure.. and weapon. Remove the heel and you can tuck in a syringe with enough sedative to fell an elephant—or Dick Wiesel ;)

Dick and Ryker have set up a whole entertaining murder mystery (which has nothing to do with my silly story above), complete with HUD (programmed by Ryker—what can’t she do?) and little gifties along the way at Skull Creek. Bored some night? Check it out.

Burning Life has started this year to much acclaim and cheering. I have to hand it to the organizers I know—Talia Tokugawa, Doctor Gascoigne, White Lebed, Dusty Linden, Calamity Hathaway, and all those Rangers. They have been working HARD to bring Burning Life to you—most of it volunteer time. If you knew the background of some of these folks, you would know the best have been working for you.

That being said, I try to attend BL in the spirit of Burning Man, so I *try* to keep my stilettos at home (cuz walking the playa in stilettos seems sort of silly, no?). So you see I am wearing shorts from AvaGardner Kungler, a vest from Emery (part of a larger outfit I bought), the all important socks with boots, these from Kaejo DeSilva and my very favorite boots from Fallingwater Cellardoor. And Fallingwater also made the pretty bangles.

The best part of the outfit, of course, is the BL Lizard, made by MenuBar Memorial for last year’s Burning Life. Thanks again, MenuBar. This little gem does everything but the kitchen sink, including smoking a pipe and drinking from a plastic cup.

Written at Berlin Stage while thomtrance Otoole cleansed my ears and mind with his amazing Psy Goa Trance. Be cleansed at Organica.