“I usually travel with a posse. I roll deep. I travel like a rapper, but without the artillery. We don’t carry guns, we carry cookies.” ~ Gabriel Iglesias 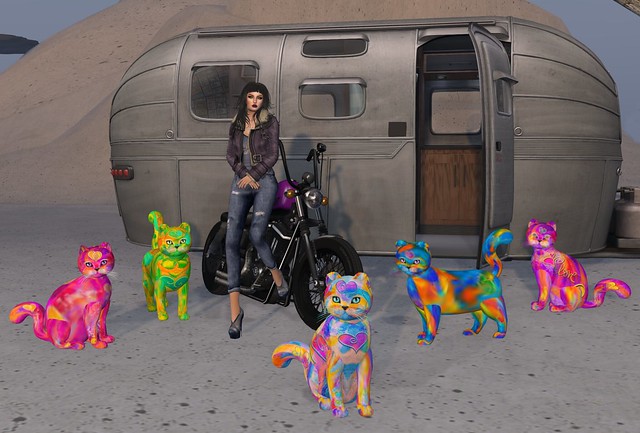 I had my posse with me at the Furillen sim. We rode into town and then parked ourselves by the Airstream Serene has put out (from Wavie Haller—one of my favorites that he made). These “cRaZy lOVe” KittyCats are the other Love Collection pets KittyCats is offering this season and they too include a special animation in them where they will rez you a blanket and special poses so you can enjoy them with a friend. We rode in on my cycle from Turluccor Mode, a brilliant piece that includes all sorts of fun stuff for riding (lights, engine, turbo) and a huge set of poses and animations for single and couples. And the bike is pretty cute with the purple tank.

The main part of my outfit is, of course, the rockin’ aviator leather jacket from Paul Lapointe and Bastchild Lotus. As always, Paul has created a solid piece with great style, perfectly fit to the Maitreya body (and others). Bast’s HUD gives a ton of options in colors and textures. I especially liked the tank add-on options with some awesome t-shirt graphics. The jacket, tank and bra come as a complete package with a kazillion options for colors—it’s a very fat fatpack. My short skinny jeans are one of LiuMiwa’s pieces for Shiny Shabby, rolled at the ankle and perfect with Glamistry’s latest bootie, which also includes a texture change HUD for a ton of options. Keon Xenda’s poses show a male model but they were PERFECT for this set of photos (truly—I just positioned myself on the bike). 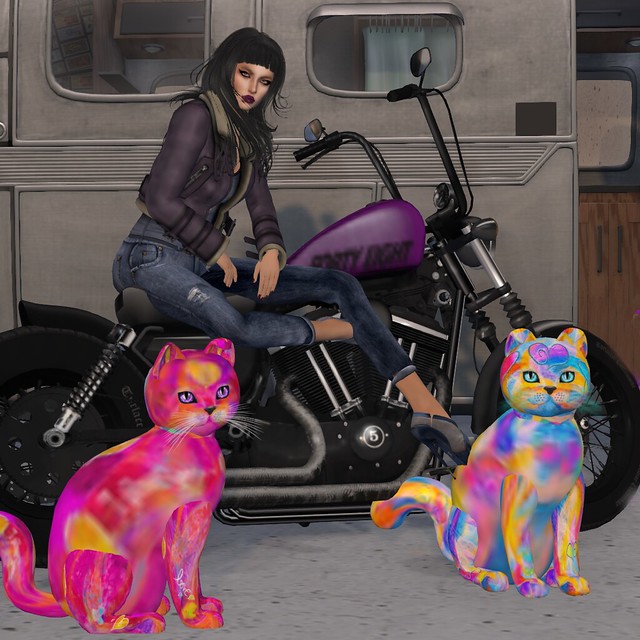 Deesselle Destiny made this sexy skin for the Catwa heads and I chose to dress it up with lipstick from the Catwa HUD and eyeliner from demi Placebo to make this hot tough girl look. I also got to try out Deesselle’s eyelashes for the Catwa head. (Kind of fun just applying eyelashes and not having to fit them into place!) A pretty necklace from Ors Quan for Shiny Shabby is a perfect piece of bling for this neckline. I love this haircut from Dubled, which is a gacha at Shiny Shabby. Frankly, you should get all of them because the shortened bangs are darling and the windblown curls are perfect for a girl who just got off her bike. 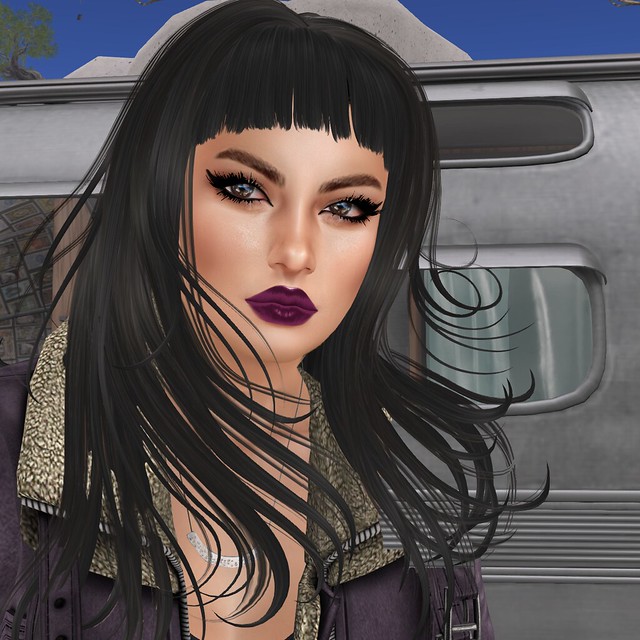 Hair: [DUE] Crush RARE by Dubled for [DUE], available at Shiny Shabby *

The moon tries every month in vain
To paint a picture of your face;
And, having failed to catch its grace,
Destroys the work, and starts again. 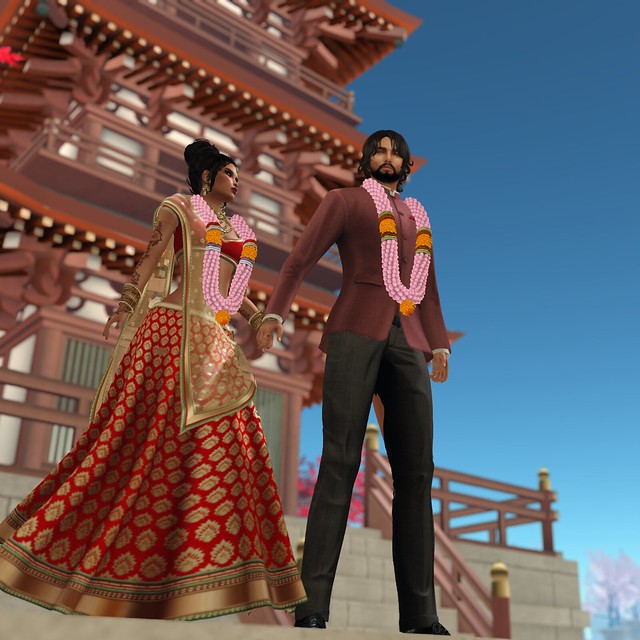 The RFL Home & Garden Expo is opening on February 14, a perfect day to do double duty in the love department. First, you can go shopping with your sweetie to update your home or buy a new one and second, you can give love to the millions of lives the American Cancer Society helps save with their research, education and outreach.

I am giving you a Bollywood version of romance because I want to remind you that the ACS doesn’t just help people in the US, but also people around the world in conjunction with their many affiliate organizations, Remember, cancer doesn’t know a nationality, so research and education developed via ACS can help anyone. And besides, I love romance and Bollywood romances are the best!

I realize it’s rather incongrous that two people in Indian outfits (most of them supplied by Zaara Kohime, who is, as we all know, the chief devi of Indian wear in SL) should be standing in front of a Japanese temple but in this case it makes complete sense as the temple is one of the items that Ryo Ixxel and Ouka Ugajin are offering with 100% of the proceeds going to RFL. It’s a magnificent structure and a beautiful addition to the sims, which are all named “Hope” and were planned and constructed by Kaerri Rae, Cain Maven and Reven Rosca, who are the generous and frazzled organizers of this year’s RFL H&G. 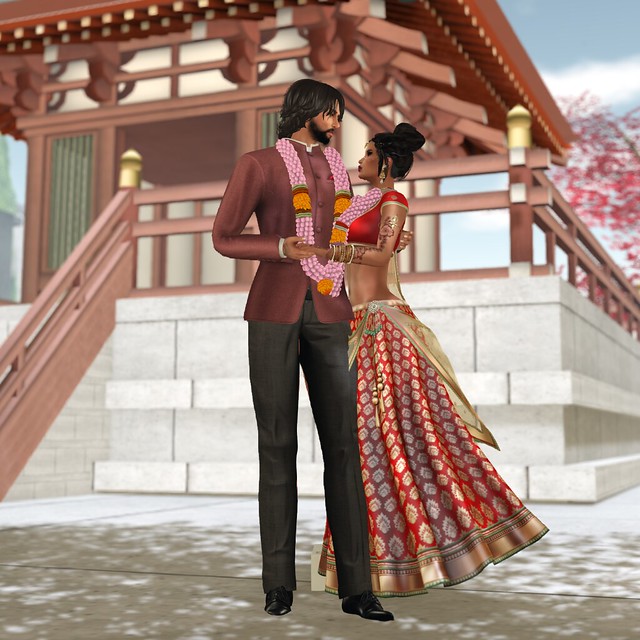 Mr. Karthikeyan Engineer is my willing but handsome victim in these “wedding” photos. (A miracle because he’s usually outfitted as a panda.) He made the garland you see both of us wearing, which includes a texture change for different parts of the garland in the fatpack. The garland is a traditional item for the bride and groom in Indian weddings. He is also contributing two other items that will give 100% to RFL–a treasure chest and a dallawali cart (which I hope to somehow feature in another blog because it’s so cool). Karthikeyan is, as you might guess, in India and loves teaching about his culture and life in Southern India.

Besides wearing Zaara’s beautiful clothing and jewelry, I piled on the beauty, which is how an Indian bride is presented to her husband traditionally. Since many Hindu Indian marriages are arranged, the bride arrives bedecked and bejeweled so that the couple’s tour around the fire three times for their wedding ceremony allows the groom to see her sparkle and shine before they enter into their new life together. I was able to combine a darker skin from one of Umazuma Metaluna’s appliers for the Catwa Annie head with an exotic liner from Demi Placebo. Henna mehendi on my arms and hands is traditional makeup and Leti Hax has made a perfect applier that doesn’t go all over the body. My romantic poses are part of a wedding set from Olaenka Chesnokov that I slightly altered with Avimote Posemaker. 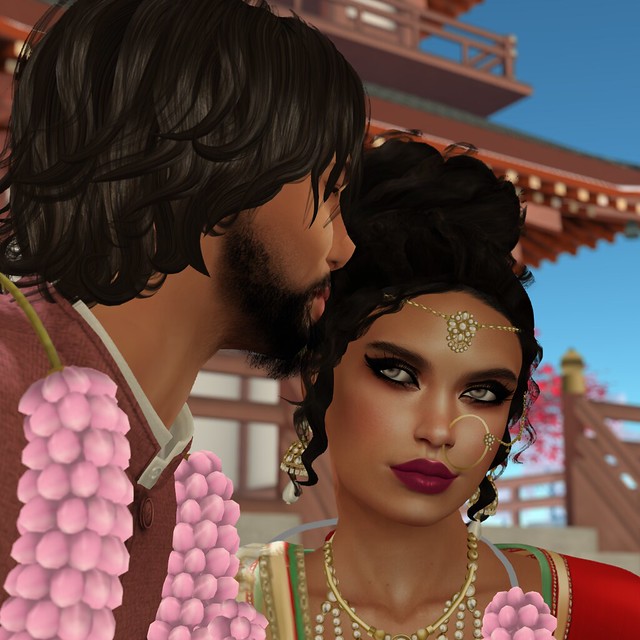 Jewelry by Zaara Kohime for Zaara