Look into my eyes, let them hypnotize
These eyes long to make you a perfect work of art

~ “Look Into My Eyes” by Janelle Monae 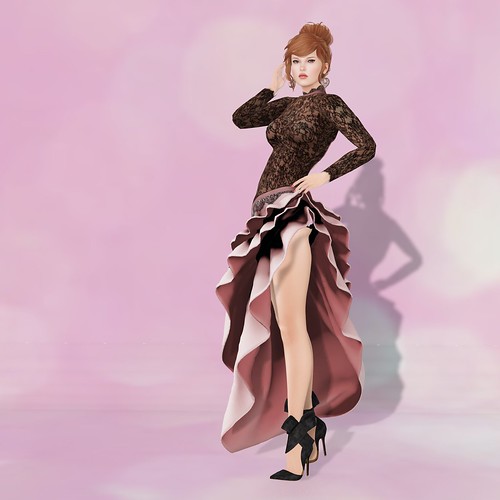 A dramatic song from Janelle Monae suits this gorgeous dress from Kiddo Oh, one that she sold at Fashion for Life to benefit charity and now presumably has at her store. (It came and went without a chance to get to it!) With the skirt cut up my thigh, it has a touch of Moulin Rouge, especially with the cut-open back. The dress comes with a HUD that allows you to change the texture of the top to suit your skin tone, making it lie beautifully against your body (be it mesh or system). Big bowed stilettos from Bens Beauty for Slink high feet—a whole set of colors in one pack for one low price—are found at Fi*Friday. 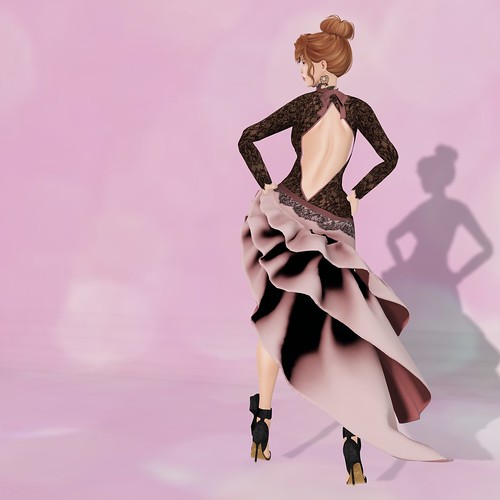 And once again I show the LeLutka mesh head, worn on my standard shape with the Maitreya mesh body. Here you can see the detailing up close. You can also see MissAllSunday Lemon’s gorgeous updo for Uber with her beautiful textures and AvaGardner Kungler’s gorgeous earrings for Cosmopolitan Room. 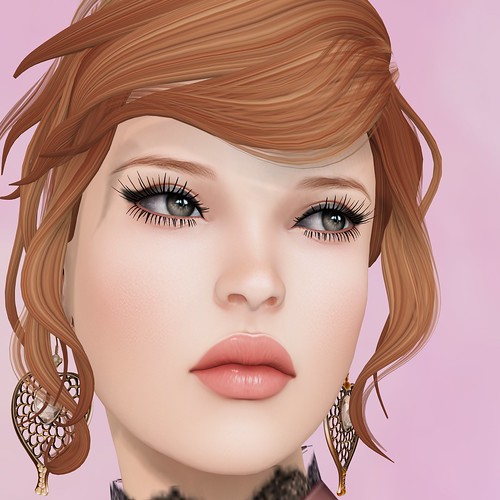 Poses by VestigeCreations for Vestige Poses *

“Hate to sound sleazy,
but tease me,
I don’t want it if it’s that easy”
~ “I Get Around” by Tupac Shakur

I am dressed to tease from the 100 Block, another one of the Depraved Nation’s fashion extravaganzas, which is opening April 9. Yeah, sorry, you have to contain your fashion lust for a few more days while I tease you (and you know how I like to tease). Start with this dangerously sexy lace mini-dress from Missqwerty Pevensey (she of the amazingly impossible-to-type name), a mesh confection for wowing the boys at the club. Pull on stockings from Lisanna Lauria with garters down the thighs and then over-the knee-boots from Ydreece Forster, and you have a complete look, all from the 100 Block.

I wiggled into this gorgeous skin from Nicole Button. I loved what she did for Skin Fair with her newest skins and now she has released them fully. I wear the skin untouched by makeup, and it’s absolutely gorgeous. I will wear this one over and over and others she has produced. They are just that lovely. My short hair is Chiaki Xue’s newest release, a unisexy style that comes in Chiaki’s full complement of colors.

“He knew more about the death of Lula Landry than he had ever meant or wanted to know; the same would be true of virtually any sentient being in Britain. Bombarded with the story, you grew interested against your will, and before you knew it, you were so well informed, so opinionated about the facts of the case, you would have been unfit to sit on a jury.” ~ Robert Galbraith, The Cuckoo’s Calling

I have been sitting on that quote a long time to use it for a look and it seems perfect because this look reminds me of Lula Landry, the tragically murdered model from Robert Galbraith’s/J.K. Rowling’s first book about the private investigator, Cormoran Strike. I read the book enthusiastically before I knew Harry Potter’s creator had written it—it really is well-written and incredibly enjoyable with full-fleshed characters and a great plot. Cormoran Strike is a complex and incredibly interesting man. Clearly Harry Potter isn’t the only one she has in her. Now she has a new one coming out in June and I can’t wait!

My Lula is fashionable, of course, but also gentle in the way Lula in the book was. She was not sharp, not a Naomi Campbell. She is a woman of mixed-race, adopted by a wealthy family, clearly loved by them. And loved greatly by the public as well, being beautiful and gentle as she is. So it’s a shock when she has been murdered. This gorgeous maxi-dress from Kim Lysette is a fashionista’s dream with its great silhouette and texture-change HUD (6 variations of this texture) and ridiculously inexpensive at 55L at Fi*Friday. I embellished with a gorgeous new necklace from AvaGardner Kungler, who contributes the best jewels to the grid. As always, her use of color and shape is what amazes.

My absolutely drop-dead gorgeous skin, the impetus for bringing Lula back, is from Shantia Soulstar. This was one of my favorite skins at Skin Fair this year, breathtaking in its beauty, proportions, and coloring. Her included makeups are subtle enough that the beauty of the skin and the avatar shine through. And with these gorgeous eyes from Umazuma Metaluna and this gorgeous long hair with trimmed bangs framing my face from Truth Hawks, my Lula is every bit the gorgeous, graceful model I imagined.

“He had never been able to understand the assumption of intimacy fans felt with those they had never met.” ~ Robert Galbraith, The Cuckoo’s Calling

Nail appliers: Nailed It – Autumn Nights Set by Giela Delpaso for Nailed It *

“Too much of a good thing can be wonderful!” ~ Mae West

So too much of a good thing can be a good thing when it’s cantaloupe or spring weather or Sunday afternoon naps. The Girl Scout cookies we just got, on the other hand…. You can never have too much good fashion, however, and LivGlam and K Collection has a way of giving us a lot of a good thing but it’s never enough. Take this sexy dress from Kim Lysette— a simple black and white pattern with subtle red undertones over a long sleeved dress with a low cut back. It’s just enough of too much.

Tobias Convair finished this sectional for FaMESHed in the nick of time for your personal pleasure. With single, couples and adult poses, this handsome piece can fit perfectly in your Convair loft from the last FaMESHED or in any space that needs a modern look and an adult feel. The pillows and blanket are color change, so you can fit it into several color schemes and it comes not only in black but also in brown and white.

Sawsan Secretspy offers this lusciously beautiful skin for the girl who can never have enough of being pretty. With darkly lined eyes and a fresh tangerine lip, this is the skin for the girl who is past red lipstick. My fringed bangs is Mirja Mills’ newest peek-a-boo style with waves flowing over my shoulders. A chic arty ring from AvaGardner Kungler at the Dressing Room Fusion makes this look just right.

“…a woman not yet seen, but whose perfume accumulates on the horizon like a storm cloud.” ~ Fernand Dumont, région du cœur et autres textes

My favorite perfume in college was Opium. And then Eau de Givenchy. Two very different scents—one cloying and sticky with richness and spice, the other very floral and fresh. Some time after that I wore Romance from Ralph Lauren. Now I wear Noa, a huge bottle of which I got in the Charles de Gaulle airport duty free when I was on layover from Berlin because I could no longer find it in the US. (Now I can get it online but I bought a barrel of it so I am still set for a while.)

The problem with virtual living is the problem of the other senses. Many people suggest touch is missing but I think it’s scent that is missing even more. The scent of a lovely lady walking by in a long gown, such as this one by Synjari Myriam. I bought the “Cream,” which is more of a taupe to me. I love the flutter cap sleeves and the wrapped front on the bodice. Synjari has managed to give this a richness and sheen with her deft texturing.

Gianni Broda (who goes by various display names I can’t keep track of) issued this gorgeously rich skin a few days ago, which he is selling at Fi*Fridays with hand and feet appliers. I think it’s gorgeous, especially with this side-tied hair from Truth Hawks, who just released a bunch of new gorgeous ‘dos. Bracelets are from one of my favorite jewelry makers, AvaGardner Kungler. My necklace and shoes came from Collabor88—Maxi Gossamer and Darling Monday. Some gorgeous finds there this month!

“The question that women casually shopping for perfume ask more than any other is this: “What scent drives men wild?” After years of intense research, we know the definitive answer. It is bacon. Now, on to the far more interesting subject of perfume.” ~ Tania Sanchez

When I listen to the radio, I hear about the economy struggling, the problems in the Middle East, the poverty in my own country, and it’s really depressing sometimes. But then I think, well, oppression is less in this world, more people than ever have access to food, technology, medicine, and beauty. And certainly I live a charmed life. It’s something I keep reminding my son too—we’re lucky.

I am lucky in SL too because I can see so many beautiful creations people make and wear them! Start with this darling dress from Maya Levane, which she is offering at the Dressing Room Fusion. With a lovely William Morris kind of print and a brown belt, it’s a simple shape with a great texture. I show it with shoes from Onyx Leshelle, who is having a half off sale on ALL her shoes, hair and clothing until mid-July, when they will put up a new mesh build.

Alexandra Barcelos has reopened Filthy Skins and she is back! The news was greeted with great happiness in the Skin Addiction group, and everyone rushed to get this group gift, which has well defined features and a lovely cupid bow mouth. One thing I found with her skins was they could be a little blurry at times around the features—that’s gone and I am very pleased. Check out those great brows! I pair it with one of Truth Hawks’ new-color styles—a high banged ponytail. Secret: it’s one of my favorites for every day wear.

Well I never really worried that much
About making lots of money and such
And I always seemed to land on my feet.
Though there’s been some difficult times
The good times where never far behind
I snatched all of my victories from the jaws of defeat

Well sometimes this life is like being afloat
On a raging sea in a little row boat
Just trying not to be washed overboard
But if you take your chances and you ride your luck
And you never, never, never, never, never give up
Well those waves will see you safely to a friendly shore

Poses by Darling Monday for fri.day