~ “Tilted” by Christine and the Queens 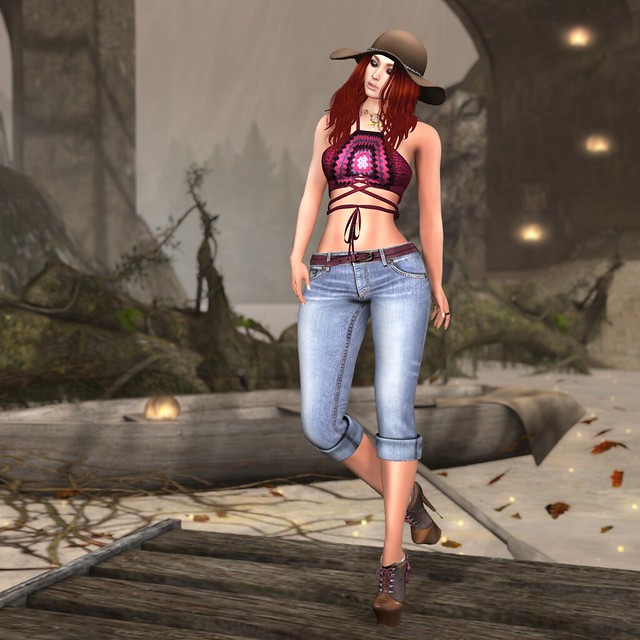 Coachella is coming up, and I am pretty excited because they have a pretty good website with live performances on it. My partner in SL lives kind of close to the event so some day I hope I can actually go and mingle among the kids. (We’ll likely be the very oldest people there.) My weekly music dude, Clark at Noon Pacific, has a little page up with recommendations with a guide to Coachella, which includes Christine and the Queens and one of their songs I particularly like.

I remixed my Coachella look with some recent event items, including a darling top from Kinu Mayako for 100 Block that holds particular interest for me because I have been crocheting a lot of granny squares lately. It’s sexy and bohemian and matched Paul Lapointe’s and Bastchild Lotus’ recently redone capris, fitted to several mesh bodies. I accessorized with a darling necklace from Ors Quan and Sigifaust’s great ring gacha set that includes a texture change HUD for any and all of the rings as a rare, both available at Shiny Shabby. Glamistry recently came out with these higher than high heel boots that include a stiletto heel (which in retrospect would be impossible to wear at Coachella but look cute with this outfit). 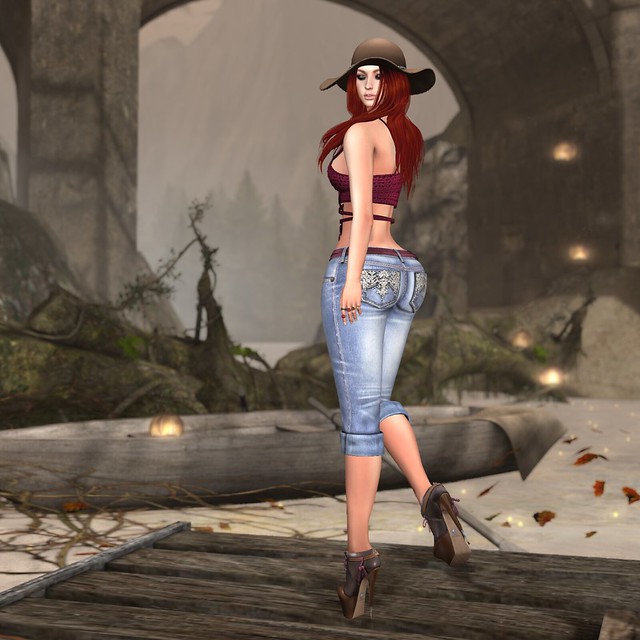 I chose Oytebis’ skin for Shiny Shabby because I thought the smudged eye makeup under the eyes was idea for a girl who is wandering Coachella at all hours. It’s a few long days and nights outside and who has time to attend to her makeup? The great thing about Oytebis’ skins is that she includes appliers for nearly every kind of mesh head with them as well as system skins, all in one HUD (except TMP, which you can request from the HUD). A floppy hat to keep out the sun from Rucy Byron comes with a texture change HUD and fits on Mina Nakamura’s hair perfectly. The two designers hooked up to offer this great look at Epiphany, and I am glad they did because it’s almost impossible to get a hat to fit hair—this time they did it for us! 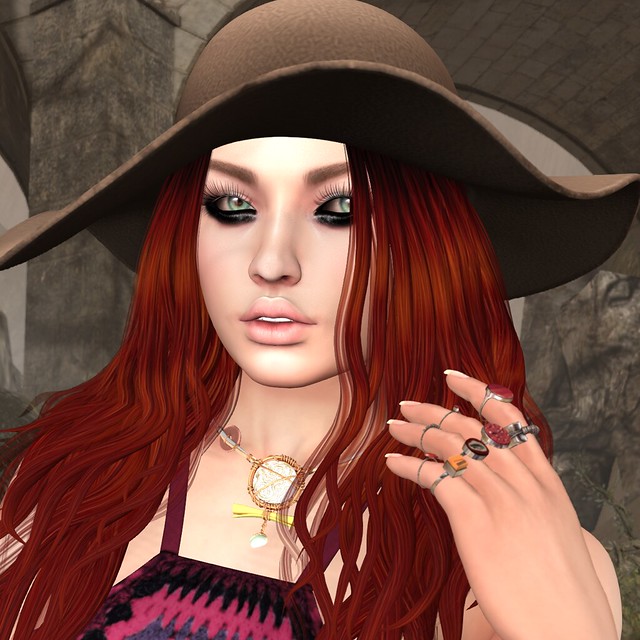 Hair with hat: MINA / !APHORISM! – Kate hair 02 by Mina Nakamura for MINA and Rucy Byron for !APHORISM!, available at The Epiphany *

The first week of August hangs at the very top of summer, the top of the live-long year, like the highest seat of a Ferris wheel when it pauses in its turning. The weeks that come before are only a climb from balmy spring, and those that follow a drop to the chill of autumn, but the first week of August is motionless, and hot. It is curiously silent, too, with blank white dawns and glaring noons, and sunsets smeared with too much color. Often at night there is lightning, but it quivers all alone. ~ Natalie Babbitt, Tuck Everlasting 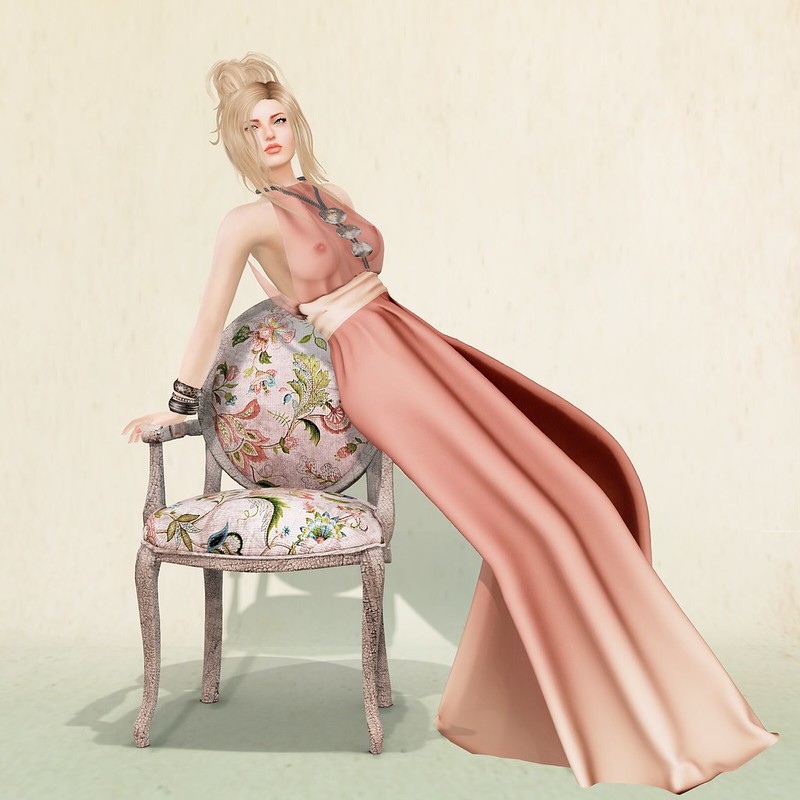 Ugh. It is literally the dog days of summer for me right now, mostly because I got a new dog in RL but also because the weather has been oppressively hot (though it just turned cooler). This quote made so much sense to me—we are teetering on the cusp of summer now and about to plunge into fall. I thought this sheer topped, elegant dress from Kiddo Oh might put me in a better frame of mind, especially since it evokes a sort of glamour that never overheats. I used Ilaya Allen’s pretty chair for the Gacha Garden as my pose prop and the gorgeous new jewelry from Mea Carnell that she is featuring at the Cosmopolitan Room. 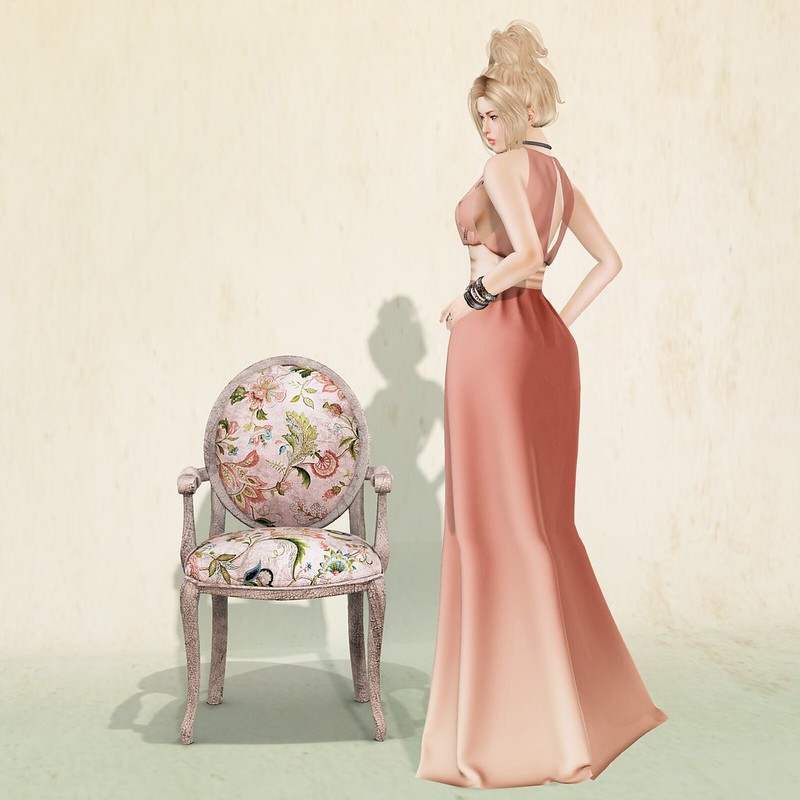 Hair pulled casually up is the perfect look and Mina Nakamura’s style for the Gacha Garden doesn’t go over board in fussiness. I took out Sopha Portal’s appliers for the LeLutka mesh heads and had a ball trying on different makeups. I will caution that Sopha’s skins tend towards the very light—this “India” tone is like no Indian person I have ever known but is, nevertheless, very pretty, especially with her accompanying makeups. The HUDs are a little annoying. You need to wear one for the skin and then another to apply the shadow and yet another for the lipstick, and the versions on the HUD are merely names—not colors or photos of the colors or styles. I much prefer Monicuzza Babenco’s graphic HUD to Sopha’s. The better feature of the HUDs, howevr, is that Sopha offers a creaseless as well as a creased eye so you can choose your look accordingly. 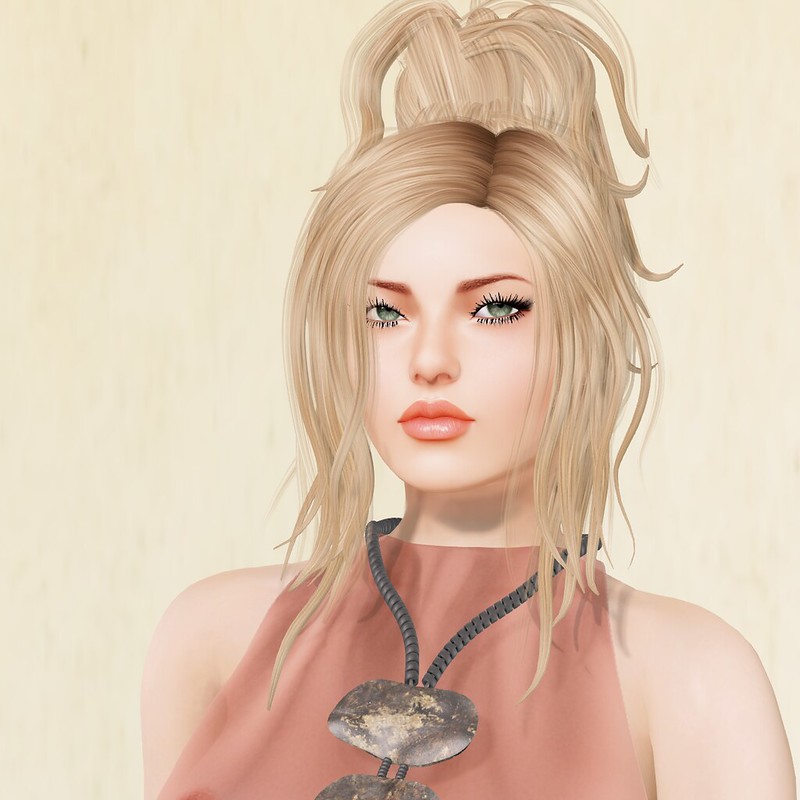