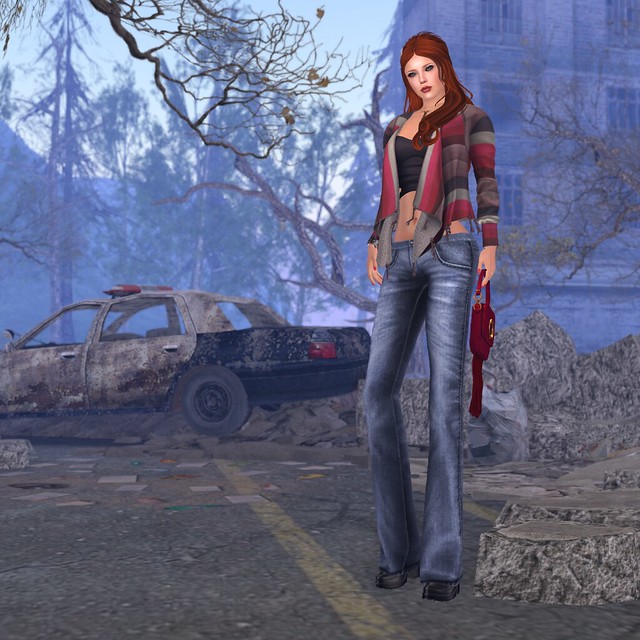 I went over to MadPea’s game on the Firestorm sims, the Ghost Town, where you can use the SL
“experience” to enjoy a game with ghosts. I didn’t play the game (yet) because I was too busy admiring the scene set up. MadPea always seems to excel in making the best of SL by pulling out all the tricks in the bag without beating you over the head with it. Make sure on a night when you’re looking for something to do, you get over there.

I thought it would be a perfect backdrop for this casual outfit from Beanster Potato that she is selling at the Hipster Fair. It comes with the sweater and tank, jeans and shoes and she includes jewelry but I wore Plurabelle Laszlo’s awesome necklace for the Jewelry & Accessory expo. A fringed purse from Plurabelle Laszlo for the same Expo echoes the fringes. 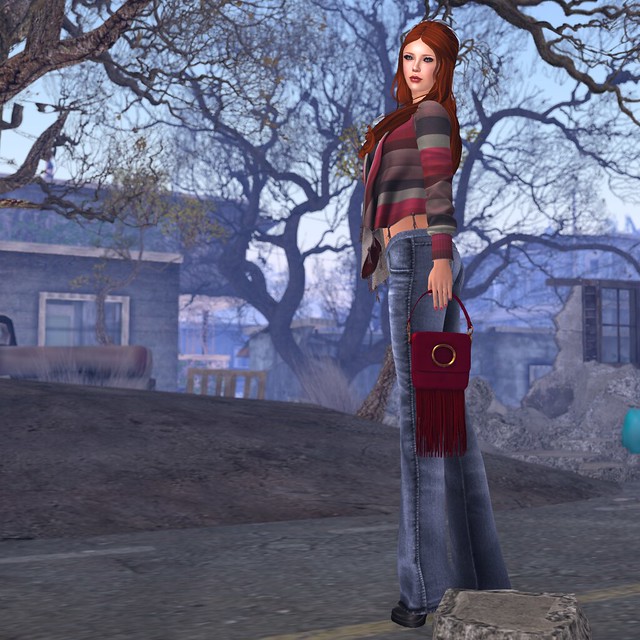 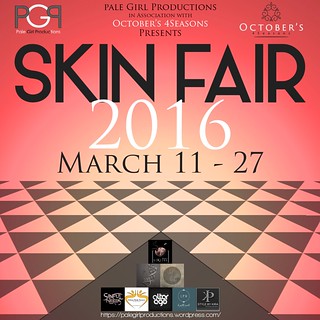 Sachi Vixen, the grand dame of SL skins, is offering this and another skin at Skin Fair this year. She includes appliers for Slink and Maitreya bodies, eye makeup, lipsticks, blush, freckles, liner, and lots of love. If you are a woman who has not converted to mesh heads or you like to take a breather, these skins are bound to make you look great! Bubbles Clawtooth is offering this wonderful style at the Arcade. It includes a separate mesh piece with HUD that allows you to have the scalp-revealing part. I might be the prettiest girl on the wrong side of town! 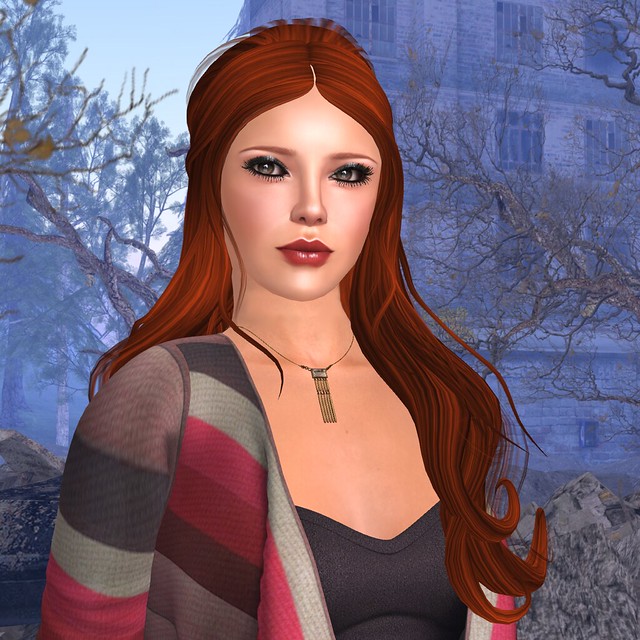 Hair: Clawtooth: Fleur by Bubbles Clawtooth for Clawtooth, available at The Arcade *

~ “Cherry Bomb” by The Runaways 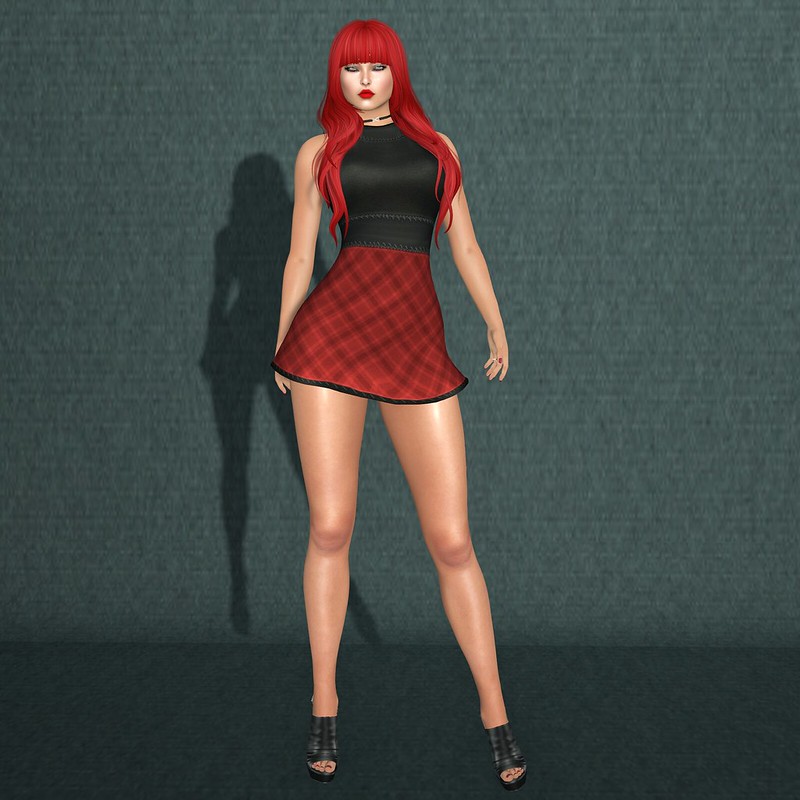 When I was looking up songs for this blog, I found photos of Lita Ford today and man, she looks darn good! I hope I can be a cherry bomb at her age! That being said, I tried to make a bomb of a girl today with this dress from Tatyana Ultsch that includes a texture-change HUD for all sorts of choices. Matched with these spicy chic shoes from Senzati0n Domenitzo for Shiny Shabby and the simple and sexy infinity choker from Sora Tatham, this look is the bomb. 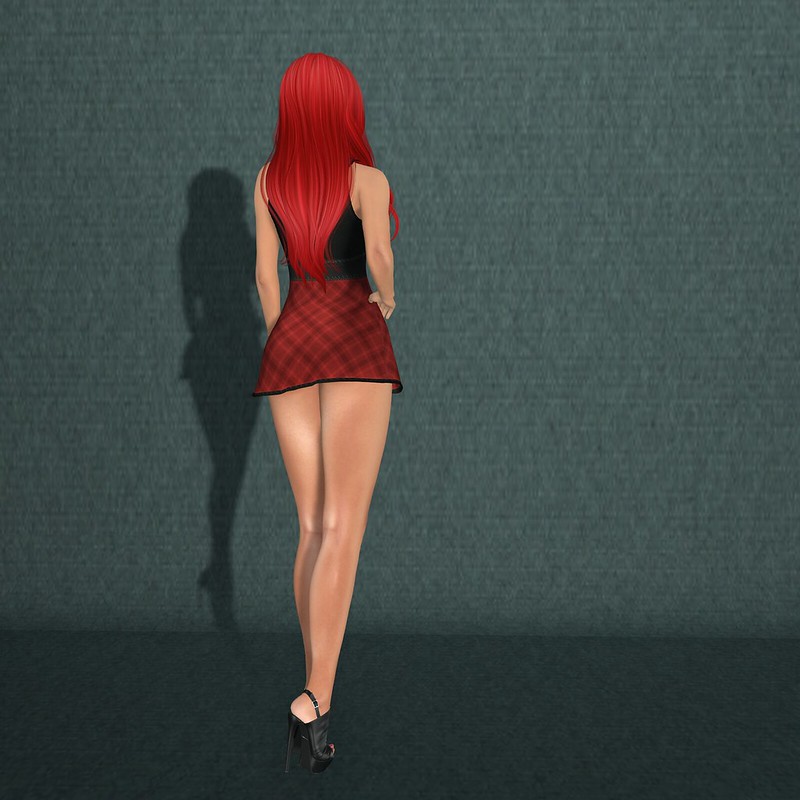 MissAllSunday Lemon released this sexy hairdo with bangs at her store, and I would say the bangs make the look, especially over this LeLutka mesh head with its sexy eyes. Even sexier is the applier from Sachi Vixen with separate makeup elements that I played with until I got this hot look. Because of the great HUD for the head itself, I was able to adjust the intensity of the eyeshadow and give it a lighter touch, which was my preference, but I left the lips intense and sexy. Sachi has also made appliers for the Maitreya body 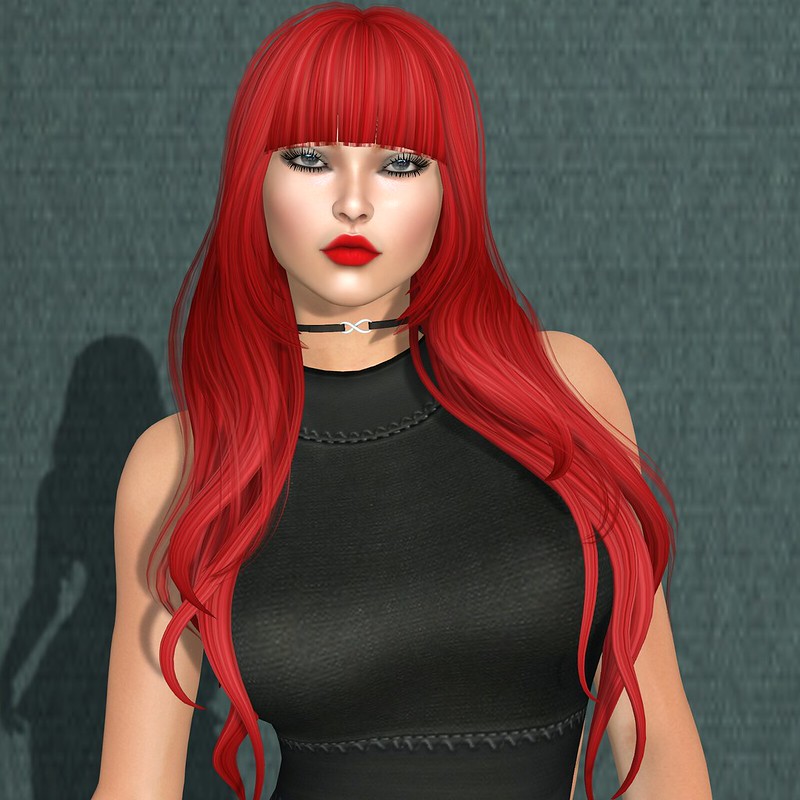 Poses by VestigeCreations for Vestige Poses *

“The N’dali of the temperate forests and hills of Southern Peninsula of Melanasia are an independent tribe of traders and craftspeople. They are most noted for their fine metalwork and technology in working with exotic creature skins and feathers such as those of the phoenix and dragon. Their people are homogenous with genetic markers such as pale fine caucasian skin, thick dark black hair and most amazingly, golden eyes, which appear ubiquitously through the N’dali people but are known as a rare recessive gene across other populations.

“As the culture is matrifocal, women enjoy a great degree of independence and power. Free of the pressures of typical patriarchal societies, both women and men flourish as leaders, artisans, nurturers and tradespeople. Some occupations weigh heavier towards one sex or the other but both sexes enjoy the opportunity to choose their vocation. Parenthood is shared, with all children taught the concept of n’dalia, or fidelity to social oneness and community. The people are, overall, very insular and communicate very reluctantly with others except in trade. It could be said that their cultural ethos is ‘G’sip a g’ringen’ or ‘Words are power.’

“As seen in Figures 1 and 2, the N’dali women’s garb is made entirely by local artisans. First, the top and skirt are sewn from treated dragonskin, which is created from a process of steps that range from the original hunt of dragons by specialized warriors to the butchering of dragons and curing of dragonskin by skilled craftspeople. The dragonskin is surprisingly light but flexible and protective—it can withstand high temperatures and resists puncturing. The collars and belt of their garments are fashioned by artisans trained via apprenticeship and are created by commission, showing the marks of their owners’ family seals-—in this case, the image of a goddess akin to Callisto on the belt.

“Figure 3 shows us the face of a N’gali woman. With fine beautiful features, the N’dali’s caucasian skin is surprisingly resistant to the elements and heat. The skin provides for N’dali women a convenient canvas for personal expression. While the facial tattoos of many women accentuate their golden eyes and provide pure decoration, the tattoos on their arms tell metaphorical tales of very personal narratives and relationships (in the case of this woman, an homage to the master craftswoman who taught her dragonskin hunting and curing). The hair is arranged in a complex construction of loops and curls, reaching ever higher heights as wearers try to outdo each other to the astonishment and subsequent duplication of their peers. It could never be said a N’dali woman is not vain.”

Excerpted from “Between the Dragon and Phoenix: the N’dali of Melanasia” by anthropologist Birgit Fredriksson-Denison.

Oh, sweet thing,
You’re just like a Sugar Buzz
Doing to me just what sugar does.
The heart is full as it ever was,
I so high like I was on some devil’s drug
You lift me up straight to the top
Suspended bliss until I drop.

~ “Sugar Buzz” by K.D.Lang and the Siss Boom Bang

Taking a break from story-telling to share a song I have been listening to over and over and a look, something so sweet it gives ME a sugar buzz. I start with a new vintage dress from Neferia Abel, the queen of fashion history in SL (well at least for the 20th century). This simple little pink frock is the basis of my sweet look, accompanied by platform shoes from Cerberus Noel (with a color change rose!) and pink gloves from Jill Lemon (who has, indeed, reopened though you won’t find these gloves at her new store).

Ponytails from Truth Hawks give me a girl-like attitude and one of Gala Phoenix’s new lustrous summer skins provides a sweet and pretty complexion. Sachi Vixen has come out with a set of glittery, glitzy eyeshadows and I wear one here, which is the sugar on top of an already pretty sweet look.

“… And I can tell any man to go to Hell if that man don’t know how to act right
Wild women, we don’t never worry, wild women never, never get the blues.”
~ Francine Reed with Lyle Lovett’s Large Band

Sachi Vixen has just come out with a set of dresses with a certain wild side to them. With this shiny snakeskin texture, eensy mini and well done shading and shadows, this sexy slinky dress is best for a wild woman out on the town. I decided to go all the way with snakeskin and accessoried with sexy python shoes from Monyka Benelli and a great serpentine necklace and earrings from AvaGardner Kungler.

My skin is a glowing beauty from Diarmiud Miklos. I have shown it before but need to again because of its sexy sophisticated style. This is not a little girl’s skin with the well-shaped eyebrows, smoky eye make-up and sensuous lips. Languid gold eyes from Ikon Innovia complete my look. Just remember: the viper will always bite back.

Wild women will be the first ones, Lord, to learn how to fly
Wild women never worry, wild women don’t get the blues….

What I am is what I am
Are you what you are or what?

~ “What I Am” by Edie Brickell and the New Bohemians

A casual look is what is needed this spring—something good for the change in seasons. I always loved girls who could wear their hair down and casually pull on a pair of jeans and look all put together. This wrap top from Lalu Bonetto is ideal for a casual look like this with its pretty retro floral print. Skinny jeans from Onyx LeShelle also make this look—chic and casual with a snug sexy fit. Nardya Rousselot’s sandals with their cute little toes makes this look complete.

Sachi Vixen has been making more new skins. This fresh lovely look is a new one from her with eyeshadows and lipsticks as she always provides. I opted for a fresh springy eyeshadow. My hair is from Helyanwe Vindaloo, who gives tossed locks a fresh update with this full style and bobby pins.

Anyusha Lilienthal recently released her Summer Jam line which made me think of the song “Summer Breeze.” God knows we need some summer breeze as another snowstorm is predicted in my area. I am glad Anyusha is coming out with this—from the mojito-flavored top to the funky Miami beat skirt, it makes me feel warm and sunshiney to wear this. Anyusha even includes a matching necklace!

My skin is a beauty just released by sachi Vixen in four darker skin tones—this being one of the lighter ones. Sachi includes a set of lipsticks and eye shadows as well as cleavage and nail polishes. I chose to wear this muted lipstick and piercing green eyes from Ikon Innovia. My cute little espadilles are from Gospel Voom, with color change options for parts of the shoe.

Finally, my hair with hat is from Nishant Zobovic. Blessedly the hat is tintable and the ribbon can be as well if you choose. I like this option. The hair itself, and all the demos I tried on were static—no flexi. Kind of a bummer.