“Do not neglect to show hospitality to strangers, for by doing that some have entertained angels without knowing it.” ~ King James Bible 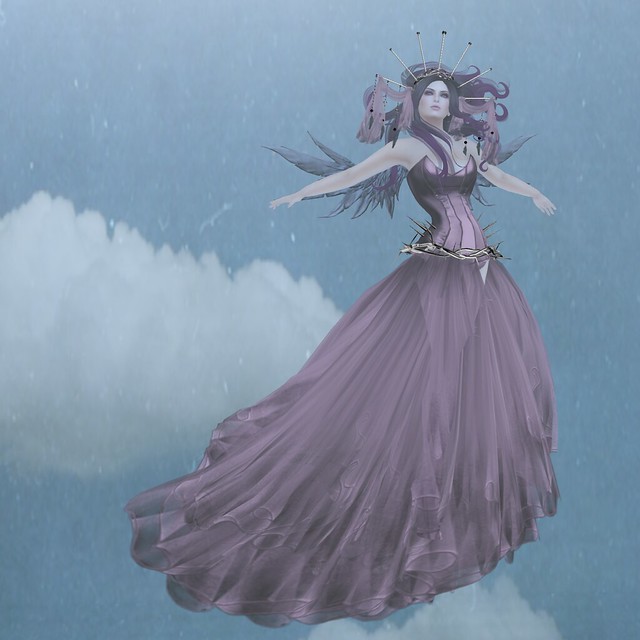 The holidays remind me of the angels who tiptoe into my SL and make it better. Start with Multimuse, who answered my early morning call for help finding wings. Add in Barely, who can throw down like no one else and take it like a man. There’s Z, who taught me windlight so many years ago and still teaches me some new trick with SL every day. And John, who tells me what esoteric dish he is making for dinner so I can rush to find the recipe. Janey, in Skin Addiction, once said something nice to me. Stephen logs on to hear me whine and still likes me. I could go on and on about my many angels (chief among them Callie). I hope you remember your angels this year and thank them for blessing your life. And in SL, if you speak to a “stranger,” try to treat them with kindness because they are someone’s angel too.

This year for the KittyCatS & Friends Advent Calendar, we had a bunch of angels, all of them giving beautiful gifts via the calendar. Today’s gift is no exception, a custom-colored gown from Mami Jewell. Mami has colored this beautiful and dramatic piece a lovely coral (though the windlight I used kind of obscures the color). The dress includes the amazing headdress and the barbed wire decorations and the amazing mesh bodice. And it’s a GIFT! A full Azul dress! 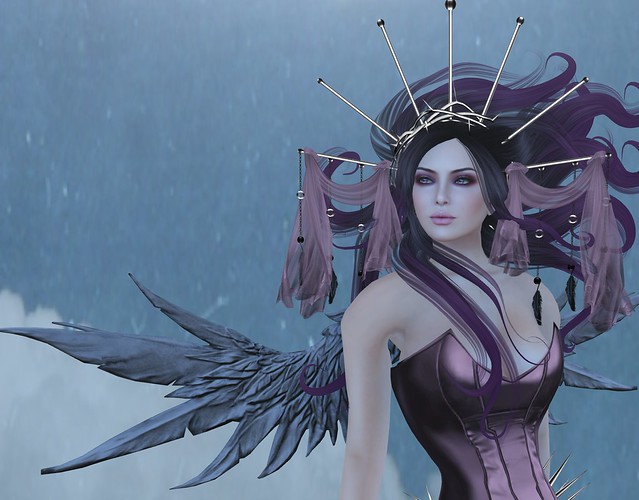 I wanted a beautiful skin to suit this look and I didn’t have to look very far with the gorgeous skins from Shyla Diggs’ work at Uber on my list. Shyla made this run of skins absolutely gorgeous with dramatic but useable makeups, colorways that will look fabulous with many different outfits. And as always, you get Shyla’s gorgeous brows, nose, lips and blushing face. My dramatic hair is Mina Nakamura’s featured work for Kustom9, a wild and fantastic hair, perfect for photos like this. With a great texture-change HUD, you get several color options, including a series of ombres. My wings from Selos Dae come in four colors, all of them beautifully textured and in four iterations for your wearing pleasure. They add the final perfect touch to this angel. 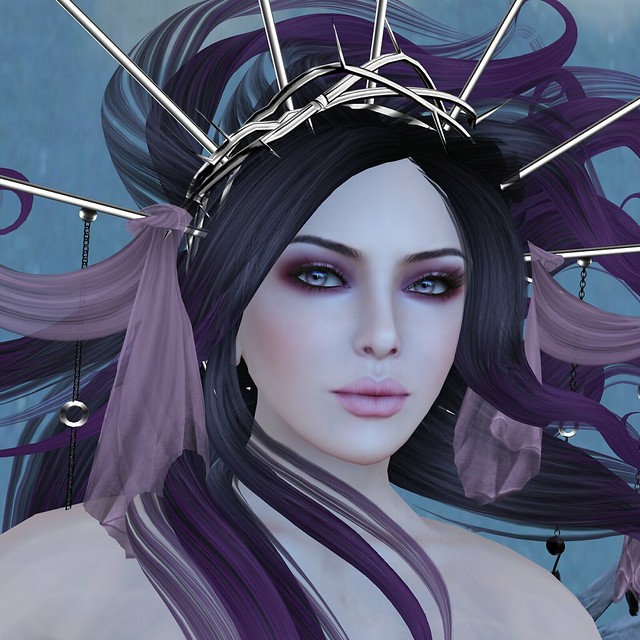 Poses by Dahriel for *PosESioN*

Ooo! I just watched my first episode of Caprica (do not spoil it for me!) and now I am squirming with the pleasure of this great science fiction series ahead of me, especially since I just finished Margaret Atwood’s The Year of the Flood.

There is a whacky discussion going on in my head right now, based on an article by James Fallows in this month’s Atlantic about How America Can Rise Again. It has to do with this notion of apocalypse or rather, how Americans face the current times and the future with a feeling that we are in decline.

I think a lot of the same malaise imbues SL, (and I am not talking about RP sims like City of Lost Angels or Midian) in the forums, the blogs, and the general chat. The Mentors are gone, the Homesteads are messed up, people are closing malls and businesses… yadda yadda yadda.

But Fallows has it right in his article, and I argue the same. “One look at the comforts and abundance of American life—even during a recession, even with all the people who are suffering or left out—can make it seem silly to ask about anything except the secrets of the country’s success,” he argues. “The typical American I see in an office building or shopping mall, stout or slim, gives off countless unconscious signs—hair, skin, teeth, height—of having grown up in a society of taken-for-granted sanitation, vaccination, ample protein, and overall public health.”

I can point to the same thing in SL: higher concurrencies, better stability, more beautiful and far reaching content than we have ever had before. Even the newbies look tons better (come on now—hardly anyone runs around with that freaky helmet hair anymore). SL is pretty damn good. Fallows’ final argument is that American history has a unique tradition of “cycles of despair followed by triumphant rebirths.” We are on the brink in this country, and I think SL is in line too. (And I apologize to all my readers from other countries—I would like to hear your thoughts too.)

This crazy opener leads into today’s look, a combo of high tech, future, and fantasy. Actually, it is all about being jacked in.

The content in SL is better than ever. Let’s agree on that. I show this amazing “kimono” from Selos Dae as evidence. From the amazingly sculpties, combining a fur with a full leg to the truly unique sleeves, upended and lined with fur, to the great streaming ties. It’s just a very funky and cool outfit.

I said this blog was all about the hair, however, and really it is (and not about the weird thoughts going on in my head). This amazing cyberhair made by lat Oh made my day. Not only is it shaped well, textured amazingly, and tremendously imaginative, but it is also scripted with a HUD so you can change color of the metal, the little round “lights” on the back, and the ends of the wicks AND you can control their glow.

My favorite part of the hair was the USB port on the earphone!! Oh imagine that, being able to jack right in to your computer. (It’s all coming clear now, isn’t it.. Caprica.. the future of the SL.. get it? OK, probably not, but trust me, it all has to do with this little USB port.)

I wear a futuristic skin from Mea Carnell who has a line of pretty groovy goth and futuristic women’s skins. And these little eyelashes from Keri Clip are my favorite because they have a little white dot on the bottom. Something about those dots is so charming.

Don’t fear the cyborg in you:

I have too many kimonos. I really don’t know why I have them all—I rarely wear them except to look at them and marvel at how beautiful they are.

I have one in inventory that I purchased on the Japan sim a while ago and have taken photos of. It is a curious mix of kimono and bondage with it’s beautiful brocaded pieces and its studded collar. I badly wanted to show this piece from *Illuminati*.

I had wandered to Urban Dare one night looking for a tail and found this great hair. I bought it because I knew it would come in handy some day, and sure enough it did.

I found myself at Gauze the other day, and I found these terrific geisha skins made by Selos Dae. I have not been thrilled with most geisha skins I have found, but Selos’ skins have great proportions and colors. They are fantastical without being unhuman. Selos Dae has a number of amazing and wild skins besides these which will enhance your fantasy looks.

Memoirs of this geisha: