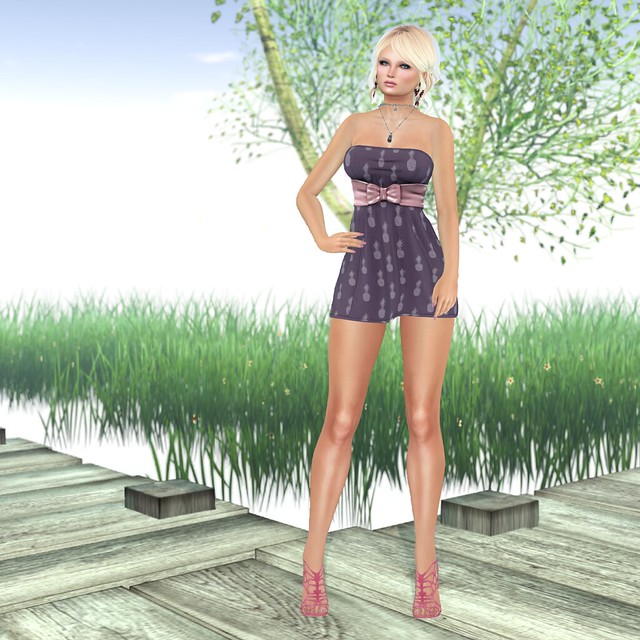 I don’t hand out compliments thoughtlessly. I hate coming off as a sycophant or as insincere. I think most folks get that when I say something complimentary, I mean it. (It’s a Midwestern thing.) That being said, I got the lucky chance to be a blogger for the Mesh Body Addicts Fair, and I have been trying to show a few things that have come through for the event. I didn’t get the full import of the event, however, until I got a preview. I really have to compliment the organizers (mainly LilDaria, the owner of the Mesh Body Addicts blog, and Ravenwings). The layout is shopping friendly without a lot of silly décor, walls, paths or other obstacles. The designers are allowed to have more than just an exclusive piece, so there is lots of shopping fun. And the line-up is freakin’ fantastic with such big hitters as Maitreya, Belleza, Catwa, Blueberry, and others participating. Even better, there are some newcomers and lesser-known names joining in, and that’s what makes it so exciting. For once it seems like no one was excluded for any other reason than they don’t do original stuff for mesh bodies. It doesn’t feel cliquey, it’s professional, and it seems everyone has put their best (mesh) foot forward with every single store filled. No small feat. Well done!

Exciting news out of Belleza too, as Tricky Boucher has released an update to the Belleza bodies with a redesigned HUD, an alternate body that takes down the graphic resources used (called Lite), and several new rigging and body part updates that make this body sleeker and better (including a seemingly seamless neck). Most importantly, the body is an UPDATE, which means no additional cost accrues to those who already own the body. That’s a big deal because Tricky derives no immediate benefit from all this work except hopefully new sales to people who will weigh the improvements against other bodies and purchase new. It’s really quite generous. Worn with one of Shyla’s recent appliers for Fifty Linden Friday, it’s a gorgeous look top to bottom. (Please note I am wearing Catwa Clip’s newest mesh head, featured at the Mesh Body Addicts Fair, one that I have been raving about for the past couple days. Looks awesome with Shyla’s applier and fits the Belleza body absolutely perfectly.) 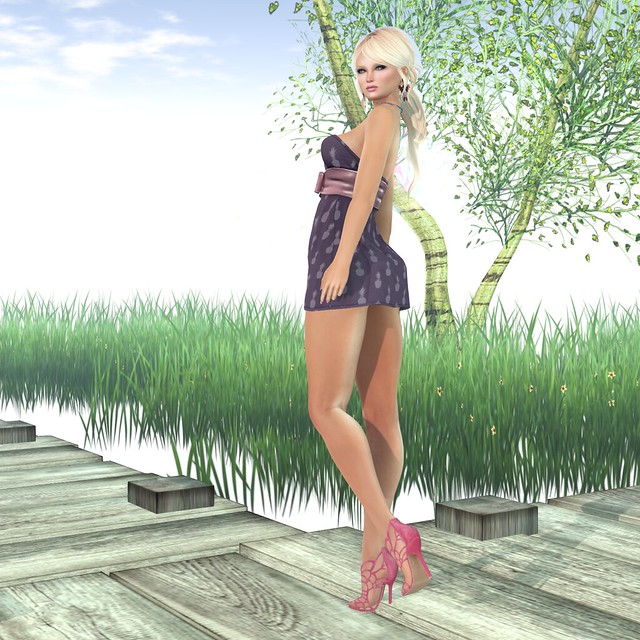 I wore this dress from Sukoshitosuto from the Mesh Body Addicts Fair, a darling number that can you around the grid and fits the Belleza Isis body perfectly. Many creators have foregone making stuff for Belleza bodies and I hope they get back to it because it’s a great body and as I understand, the designer pack is easier to use than others. Shoes from Equitum, which are featured at Tres Chic, fit the Belleza feet and add prettiness to my look.

I hunted down the pretty necklace Crashnoww has in his gacha at The Epiphany and wore AvaGardner Kungler’s newest earrings for the Cosmopolitan Room, glamorous and pretty with this look. Finally, Elikapeka Tiramisu’s ponytail for Shiny Shabby is a simple and pretty look for getting around the grid. 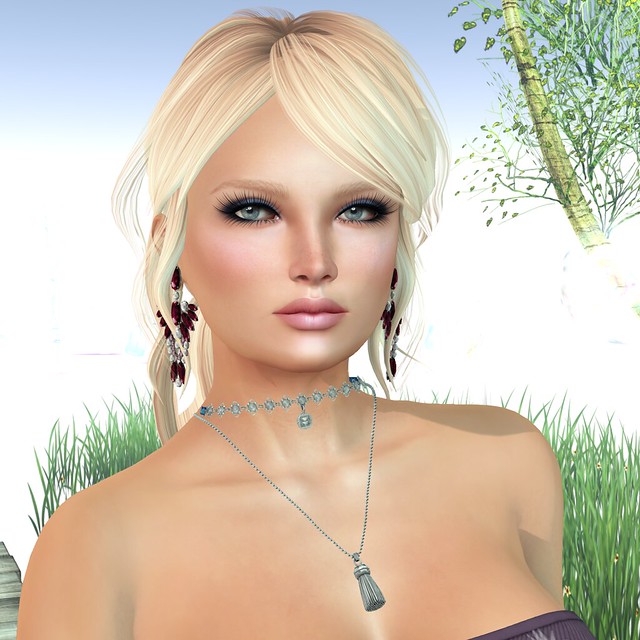 Necklace: **RE** Surya Necklace – Common – Silver by crashnoww for RealEvil Industries, available at The Epiphany

at girls who wear glasses? I think a lot of men here would answer “Yes!” considering the number of brainy women in SL. If your girl is one of these kinds of girls, the kind who keeps “Lady Chatterley’s Lover” and a stack of O’Reilly books near her bedside, who quotes Anais Nin AND Dr. Dobbs, who can purr Neruda and Ruby in your ear, then this is the one for her.

First we have this delicious ensemble from Shai Delacroix, which includes elements of everything your favorite geek girl probably likes. First, with its brocaded fabrics, sweet lacy top on the panties and retro thigh highs, the outfit is imbued with romance.

Then there are the low cut back and panties sliding up the derriere—definitely sexy. Finally, with the ties wrapped around the neck and upper arms, tied around her waist and hips, there is a bit of bondage in the outfit, and honestly, geek girls all enjoy a touch of kink.

These sweet little shoes from Hays Uriza should make every thinking girl happy. With their twist on Mary Jane styling, from the criss-crossed straps to the platform sole to the shiny vinyl texture, they suit her need for a bit of practicality combined with clumsy girliness mixed with a naughty touch of latex.

How wrong it is for a woman to expect the man to build the world she wants, rather than to create it herself. ~ Anais Nin

Morphine Janick of the Sweetest Good-bye (which is a great store name—makes me feel emo in a good way) has created a great outfit for Black Swan’s Swansong—Placebo. She has rendered a very precise system piece in her body suit with its fishnet stocking on one side and vinyl legging on the other. Her zipper work and seam matching is flawless. The wings are petite—I prefer that, actually. They are more an accessory than the feature piece as wings are usually.

This is a fantasy piece, more suited to photographs than to trips to Franks. Actually, if you wore it, you would be the talk of the room.

I styled this outfit with Viktoria Brandenberg’s Black VIK 6-Laces Knee Boots. Black, shiny, wicked, these boots come as knee high or she has another in full thigh high. With 10 colors available on the laces, I find myself wearing the boots more and more frequently, matching them to any outfit that has even a hint of black leather.

The skin is one of Pulse’s newest—Iced Grape. This “futuristic” look worked well with an anime sort of hair from Kin Keiko (it’s a bit older–not sure if it’s for sale anymore).